(CNN)“Nomadland,” director Chloé Zhao’s small-boned movie about nomads in America, earned best picture at a 93rd Academy Awards defined by the pandemic, as movies that premiered on streaming services ruled the ceremony — an in-person event mounted under Covid protocols.

In a year where the pandemic shuttered theaters and turned movie-goers into couch potatoes, 15 of the 23 statuettes went to projects that at the very least simultaneously premiered on streaming services, with “Nomadland,” which was acquired by Hulu, representing the first best picture winner from that relatively new medium.
Frances McDormand also won for the film, three years after her Oscar for “Three Billboards Outside Ebbing, Missouri.” Anthony Hopkins, meanwhile, was named best actor for his role as a dementia-ridden man in “The Father,” eclipsing the emotional moment that would have come had Chadwick Boseman been only the third actor to receive posthumous honors for “Ma Rainey’s Black Bottom.”
At 83, Hopkins becomes the oldest winner ever. His previous Oscar came almost 30 years ago, for “The Silence of the Lambs.”
Unlike some past ceremonies that have seen one film dominate, this year’s awards spread the wealth among multiple movies. “Nomadland” led the way with three awards, while five other films nabbed a pair.
Among the producers’ several puzzling choices, best picture was actually presented before the two top acting awards, breaking with years of precedent. 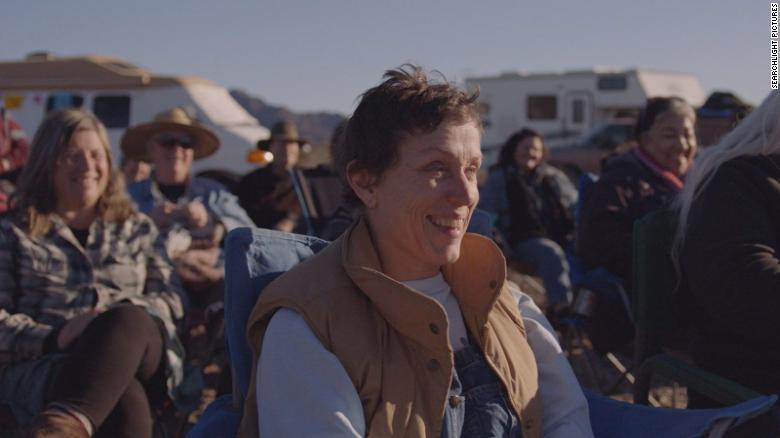 Frances McDormand stars in “Nomadland” (2020), directed by Chloé Zhao
Overall, Netflix garnered six trophies, marking the culmination of the leading streamer’s courtship of Oscar voters, despite resistance and misgivings within the Academy of Motion Picture Arts and Sciences, the organization that presides over the awards.
After the nominations made history on a variety of fronts, the awards did as well, Breaking with tradition, the producers chose to hand out best director early, with the Chinese-born Zhao becoming only the second woman ever to claim that prize, following Kathryn Bigelow for “The Hurt Locker” in 2010.
“Minari” co-star Yuh-jung Youn also became the first Korean actress to win an Oscar, in the process adding a more dubious footnote to Glenn Close’s illustrious career: With her eighth bid for “Hillbilly Elegy,” she ties Peter O’Toole as the actor with the most nominations without ever having won. 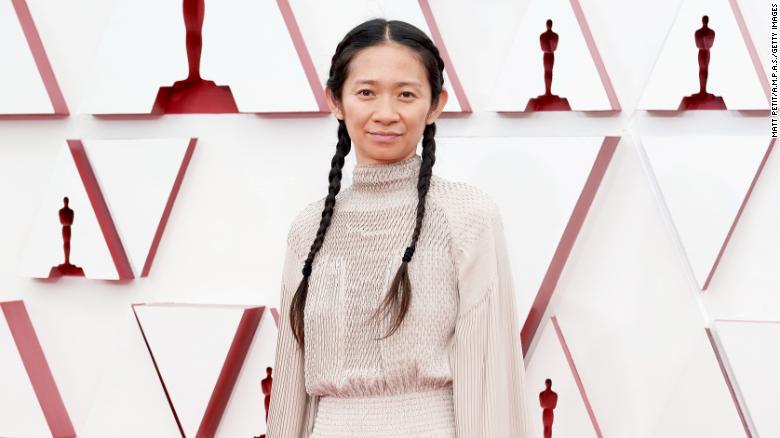 Chloé Zhao won best director. (Photo by Matt Petit/A.M.P.A.S. via Getty Images)
Adding to the international flavor, the evening began with screenplay awards that went a pair of Europeans: “Promising Young Woman’s” Emerald Fennell — for a story that dealt with sexual assault — and “The Father’s” Florian Zeller, both of whom also directed those films. (The latter accepted remotely, but most nominees were in Los Angeles.)
Daniel Kaluuya earned his first Oscar for “Judas and the Black Messiah,” playing Black Panther Party leader Fred Hampton, in a movie that released simultaneously in theaters and on HBO Max, and also saw H.E.R. earn best song for “Fight For You.” (Both Warner Bros. and the streaming service are, like CNN, a unit of WarnerMedia.) 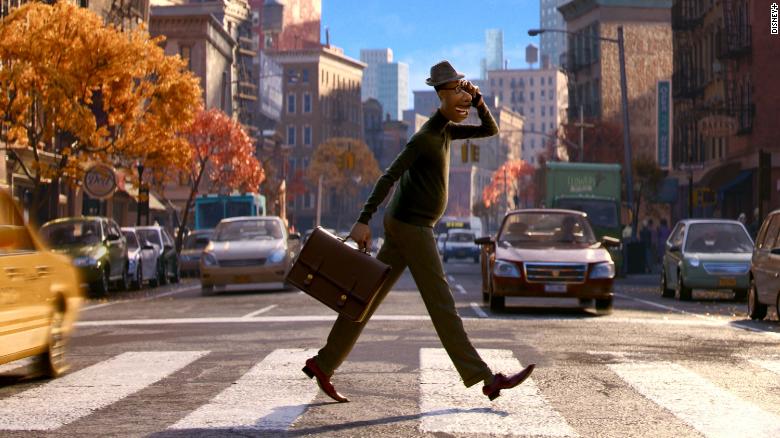 “Soul.” Courtesy: Disney/Pixar
“Soul,” one of the movies redirected to streaming — in this case, Disney+ — was named best animated film, marking the third Pixar movie from director Pete Docter (with Kemp Powers as co-director) so honored, following “Up” and “Inside Out.” It’s also the first of the studio’s movies to feature a predominantly African-American cast, with Jamie Foxx voicing the central character, and added an Oscar for best musical score.
“Another Round,” the Danish movie, received the prize for international feature film. Director Thomas Vinterberg delivered an emotional speech about the death of his 19-year-old daughter Ida in a car accident during the making of the film.
The makeup/hairstyling team from Netflix’s “Ma Rainey’s Black Bottom” also became the first Black winners in that category, with the Netflix film receiving the Oscar for costume design as well.
In other technical categories, “Mank,” the Hollywood history lesson about the making of “Citizen Kane,” took honors for production design and cinematography, “Sound of Metal” claimed sound and editing, and Christopher Nolan’s sci-fi thriller “Tenet” earned best visual effects. 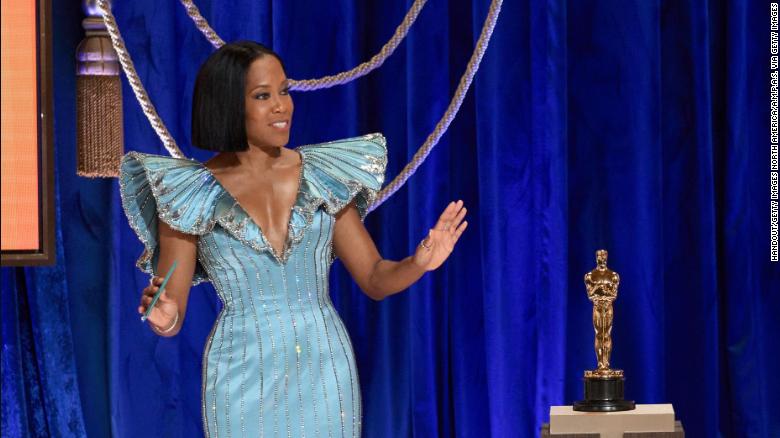 Regina King presents the Oscar for original screenplay. (Photo by Todd Wawrychuk/A.M.P.A.S. via Getty Images)
Regina King opened the ceremony, referencing the recent verdict in the Derek Chauvin trial, and saying that she wouldn’t apologize for injecting politics into the show. As the mother of a Black son, she said, “I know the fear that so many live with, and no amount of fame or fortune changes that.”
Later in the show, the provocative “Two Distant Strangers,” about a police killing of a Black man, was recognized as outstanding short film.
Other political issues, such as gun violence, played a role in the ceremony, but one of the most impassioned pleas came from the winner of the Academy of Motion Picture Arts and Sciences’ humanitarian award, Tyler Perry, who urged viewers to join him to “refuse hate” when it came to other people. 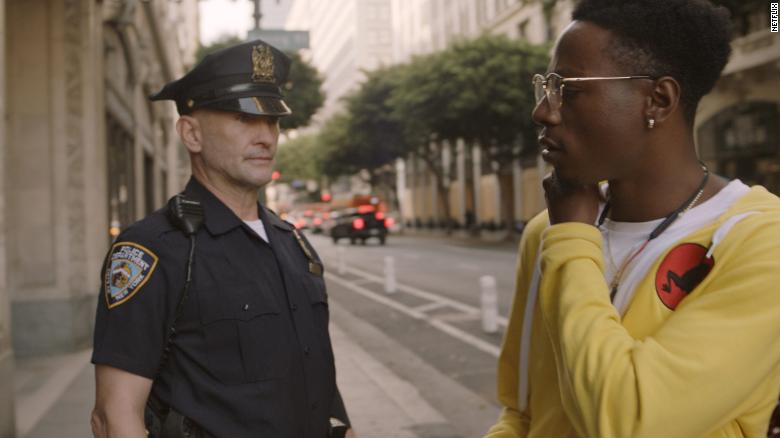 Andrew Howard as Merk and Joey Bada$$ as Carter in “Two Distant Strangers.”
Due to the pandemic, this year’s Oscars extended the awards calendar by two months and made what was described as a one-time-only exception allowing movies that premiered via streaming and weren’t released theatrically to compete. But those same factors also resulted in several movies that might have contended for awards being delayed beyond the eligibility window, hoping for a more traditional release — and greater box-office revenue — once theaters reopen.
As a result, five of the eight best-picture contenders premiered exclusively or simultaneously on streaming services, with Netflix amassing 35 nominations, more than any other distribution entity.
Award-show ratings have been in steep decline during the pandemic, and after record-low results for Emmys, Golden Globes and Grammys, the Oscars — which already hit a low point in 2020, when “Parasite” made best-picture history — are expected to be no exception. The focus has been, rather, on putting on the best possible show, and hoping for better in 2022.
The pre-show included a video urging people to return to theaters as the movie industry heads into the summer, using the hash tag #TheBigScreenIsBack
SOURCE: CNN
Share on:
WhatsApp
Share this on WhatsApp