(CNN)Think of Japan in the spring, and the image that comes to mind is likely the country’s famous cherry blossoms, also known as “sakura” — white and pink flowers, bursting across cities and mountains, petals covering the ground.

The flowers, which experience a “peak bloom” that only lasts a few days, have been revered in Japan for more than a thousand years. Crowds celebrate with viewing parties, flocking to the most popular locations to take photos and have picnics underneath the branches.
But this year, cherry blossom season has come and gone in the blink of an eye, in one of the earliest blooms on record — and scientists warn it’s a symptom of the larger climate crisis threatening ecosystems everywhere.
Yasuyuki Aono, a researcher at Osaka Prefecture University, has gathered records from Kyoto back to 812 AD from historical documents and diaries. In the central city of Kyoto, cherry blossoms peaked on March 26, the earliest in more than 1,200 years, Aono said. 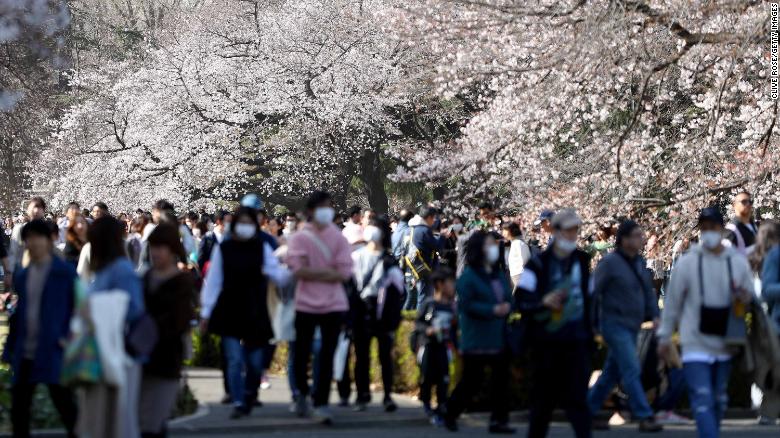 People flock to Tokyo city parks to view the blooming cherry blossoms on March 21.
And in the capital Tokyo, cherry blossoms reached full bloom on March 22, the second-earliest date on record.
“As global temperatures warm, the last spring frosts are occurring earlier and flowering is occurring sooner,” said Dr. Lewis Ziska from Columbia Universities Environmental Health Sciences.
The peak bloom dates shift every year, depending on numerous factors including weather and rainfall, but have shown a general trend of moving earlier and earlier. In Kyoto, the peak date hovered around mid-April for centuries, according to Aono’s data, but began moving into early April during the 1800s. The date has only dipped into late March a handful of times in recorded history.
“Sakura blooms are very temperature sensitive,” said Aono. “Flowering and full bloom could be earlier or later depending on the temperature alone,” he said. “The temperature was low in the 1820s, but it has risen by about 3.5 degrees Celsius (6.3 degrees Fahrenheit) to this day.”

Cherry blossoms in Kyoto, Japan, are blooming about 10 days earlier than they did 100 years ago, according to research in the International Journal of Biometeorology. The earlier bloom coincides with rising temperatures, suggesting climate change is affecting the length of growing seasons. The grey dots represent the date of peak blooms from the year 900 through 2015. The red line shows the 10-year moving average.

This year’s seasons in particular influenced the blossom dates, he added. The winter was very cold, but the spring came fast and unusually warm, so “the buds are completely awake after enough rest.”
Their early bloom, however, is just the tip of the iceberg of a worldwide phenomenon that could destabilize natural systems and countries’ economies, said Amos Tai, assistant professor of earth science at the Chinese University of Hong Kong.
There are two sources of increased heat, which is the main factor making the flowers bloom earlier: urbanization and climate change. With increased urbanization, cities tend to get warmer than the surrounding rural area, in what is called the heat island effect. But a bigger reason is climate change, which has caused rising temperatures across the region and the world.
And these earlier dates aren’t just a matter of tourists scrambling to catch peak bloom before the petals all fall — it could have a lasting impact on entire ecosystems, and threaten the survival of many species. 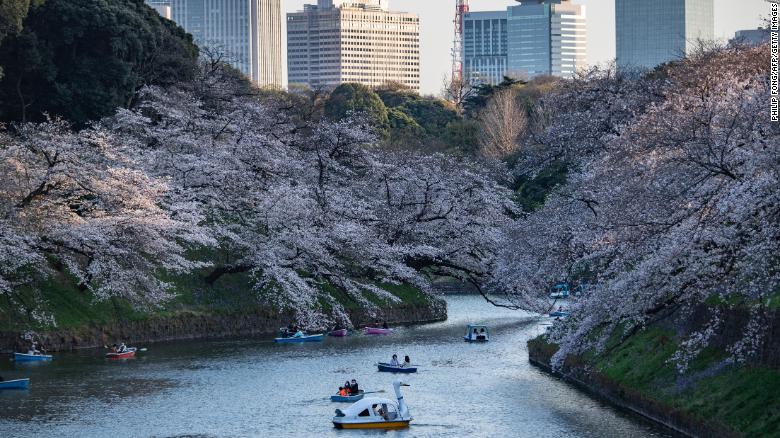 Cherry blossoms at Kitanomaru Park in Tokyo, Japan, on March 23.

For every action there is a reaction

Plants and insects rely heavily on each other, and both use environmental cues to “regulate the timing of different stages of their life cycles,” said Tai. For instance, plants sense the temperature around them and if it’s warm enough for a consistent period, they start to flower and their leaves start to emerge. Similarly, insects and other animals depend on temperature for their life cycles, meaning higher heat can cause faster growth.
“The relationship between plants and insects and other organisms have developed over many years — thousands to millions of years,” said Tai. “But in the recent century, climate change is really wrecking everything and perturbing all of these relationships.”
Different plants and insects may respond to the rise in heat at different paces, throwing their life cycles out of sync. Whereas they once timed their growth simultaneously each spring, now flowers may bloom before insects are ready, and vice versa — meaning “the insects may not find enough food to eat from the plants, and the plants don’t have enough pollinators (to reproduce),” he said. 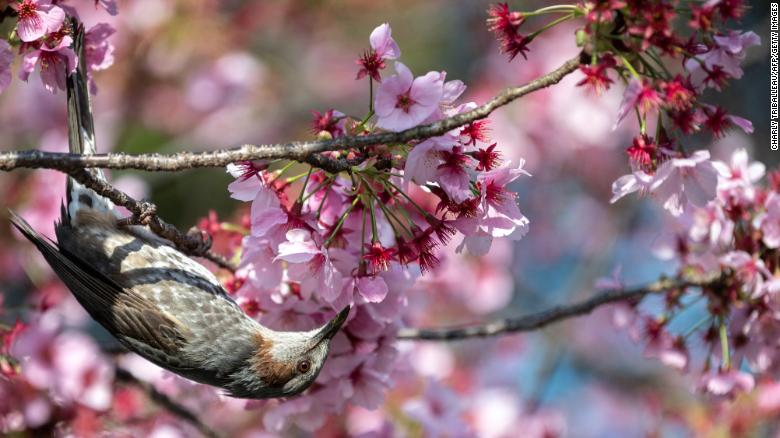 A bird next to cherry blossoms at a park in Tokyo, Japan, on March 23.
Over the past decade, some plant and animal populations have already begun shifting to both “higher altitudes” and “higher latitudes” to escape the effects of climate change, according to a 2009 study in Biological Conservation. But it’s becoming harder for ecosystems to adapt, with climate change making the weather more and more unpredictable. Though the trend of flowering dates is generally moving earlier, unexpected and extreme weather means that there is still huge variability year-by-year.
“Ecosystems are not accustomed to these kinds of large fluctuations, it causes them a lot of stress,” said Tai. “Productivity may be reduced, and ecosystems may even collapse in the future.”

Not limited to cherry blossoms

This year’s change in flowering dates isn’t limited to just Japan; the cherry blossoms that adorn the Tidal Basin in Washington, DC, have also bloomed early. According to the National Park Service, the peak bloom date of the Washington cherry blossoms has advanced forward by nearly a week from April 5th to March 31.
And the effects of climate change aren’t just limited to cherry blossoms.”Cherry blossoms catch the eye, people love to go see them, but lots of other plants are experiencing changes in their life cycle as well, and may have even stronger influence on the stability of their ecosystems,” said Tai.
The same phenomenon is already happening to many crops and economically valuable plants, he said — posing big problems for food security and farmers’ livelihoods. Food supplies in some of the most vulnerable regions in the world are being directly affected by droughts, crop failures and locust swarms.
In some regions, farmers may be forced to change the types of crops they grow. Some climates will become too hot for what they are growing now, while other climates will see more flooding, more snow, more moisture in the air, which will also limit what can be grown.
“(Farmers) have a much harder time predicting when they will have a good year, when they will have a bad year,” Tai added. “Agriculture now is more like a gamble, because climate change is randomizing the things happening in our ecological systems.”
SOURCE: CNN
Share on:
WhatsApp
Share this on WhatsApp