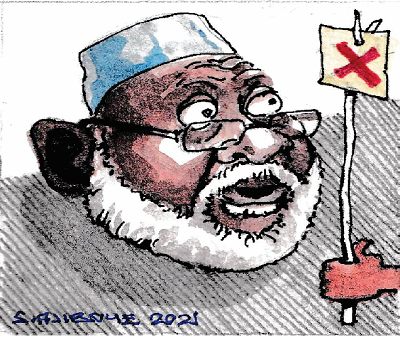 In his diagnosis of the Nigerian crisis, former military head of state Abdulsalami Abubakar dwells richly on the rhetoric and perhaps inflammatory statements of some state chief executives but gives only a glancing tackle to the chief culprit, the Muhammdu Buhari administration, which he of course euphemistically calls the federal government in a second engagement with journalists. In the first engagement with reporters in Minna, Niger State, last Tuesday, he blames Nigerians for acting and speaking divisively and trading blames rather than coming together to block the enemy from exploiting national fissures. According to him, “As if insurgency, kidnapping and robberies are not a cupful, the recent happenings in some parts of the country of ethnic attacks are unfortunate and adding to the problems. In the last two weeks or so, tension has been growing in the country and embers of disunity, anarchy and disintegration are spreading fast; and if care is not taken, this might lead us to a point of no return.”

The former military head of state would have done well and spoken boldly to call out the current administration for its lethargy and divisiveness as a major factor in the crisis, but he instead chooses to be philosophical, describing “these times” as demanding from Nigerians “that we all join hands to resolve our challenges so as to keep our country united.” As he puts it, “We do not have the luxury of trading blames. Thousands of our people are homeless and refugees across the length and breadth of their own country. It is true that we are all in a state of fear and collective anxiety. However, the last thing we need is for the enemy to sense a lack of unity on our part or a break in our ranks.” In other words, without affording the country a proper understanding of the root causes of the crisis which he believes may be leading the country to war, he simply goes ahead to look at the implications of the people’s misbehavior, and then prescribes what he thinks the solutions are, much of which he captures in homilies to the people and locates in their lack of resolve and inadequate sense of unity.

In fact, it was more pointedly in his second engagement on a television programme also last week that he attempted to implicate both the federal and state governments as parts of the problem. He hopes that the National Peace Committee which he heads will join hands with other patriots to find solution to the crisis tearing the country apart. It is not clear whether the diagnosis he made while engaging journalists fully represents the sentiments and opinions of members of the peace committee. But what is clear is that as a former head of state, he was expected to be more forthright and fearless in identifying where the problems are coming from, and needed to apportion blame with such candour that the culprits would have no doubt that he was speaking to their complicity.

Gen. Abubakar is of course not ex-president Olusegun Obasanjo, the only former president who has called a spade a spade by examining the ongoing crisis and pointing at the complicity, lack of capacity and relentless malfeasance of the Buhari administration. Gen Abubakar is at liberty to carve a unique approach of addressing the issues, including making his views known in temperate language rather than the withering tones Nigerians now associate with Chief Obasanjo. But no matter how unique that approach is, the general owes the country, particularly in these testy times, not only the unvarnished truth, but truth and inescapable facts offered boldly. If he prefers to continue to waffle in these troubling times, Nigerians may start to wonder just how much depth of understanding he has of the existential crisis facing them. The problems are deep and complex, but they are not difficult to fathom.

It is important to remind the former military head of state that the problem he fears may be leading the country to another civil war are not caused by the people he is accusing of opening up the country to warmongers. The people may not have an indomitable sense of unity as he implies, but there is little doubt that they are merely reacting as best as they know as victims to the persistent attacks on their well-being and livelihood by herders and other criminal elements. They may be inexpert in semantics of national unity and lack the luxury, patience and elegance the elites and leaders are accustomed to, but they can be trusted to know where it hurts. After all, the general must ask himself why the people all of a sudden have taken to this quarrelsome path and spoken viciously to one another after many decades of living together fairly peacefully.

Something is terribly wrong, and if Gen Abubakar cannot find the courage to identify that terrible wrong, he should be less forward about speaking on it. The Buhari administration may want to blame a faltering economy for the country’s woes, and his security agencies may like to assume that naysayers and conspirators want to undermine the administration and compromise the peace of the country. In reality, however, analysts of the Nigerian condition must factor in the alienation inspired by the Buhari administration, its biases against certain geopolitical zones, the unfair and skewed security and general appointments, the lack of appreciation of the complexities of a heterogeneous society, the inattentiveness to things that matter as cabals seem to have sliced parts of the government and governance among themselves. Chief Obasanjo may be morally unqualified in many respects to pontificate on Nigeria, but he speaks candidly to these failings. Gen Abubakar should try to do the same, obviously in his own unique ways, and ensure that his counsel is directed to the right place.