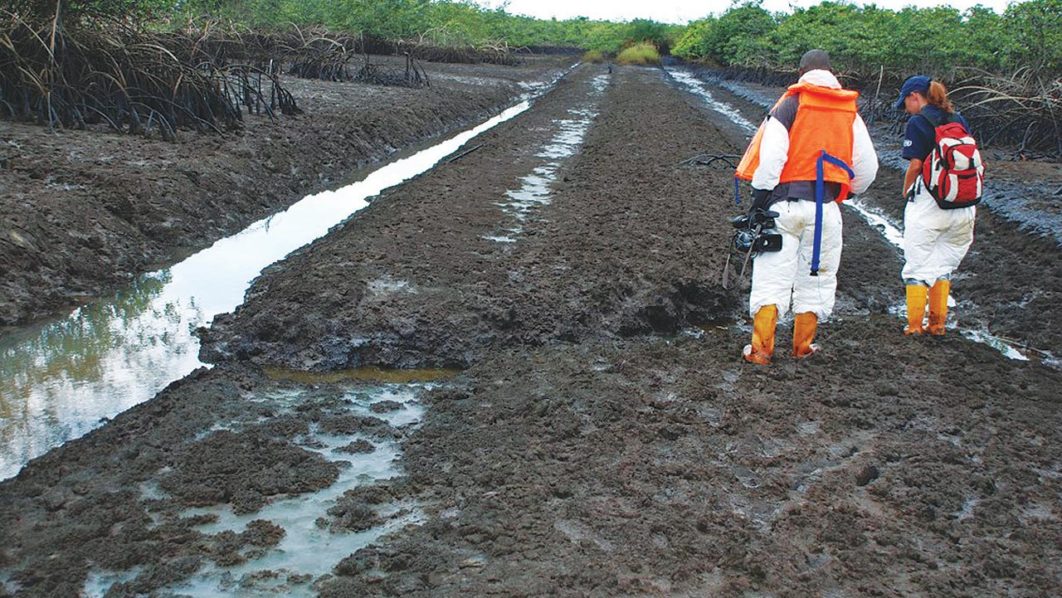 Stakeholders in the Niger Delta region and some politicians, including Rivers State Governor, Nyesom Wike, have differed sharply and significantly over the continuing stagnation of the Ogoni cleanup exercise. This is just as the people continue to cry out about contaminated water and food, with their resultant health implications staring the people in the face.

While Governor Wike has consistently described the cleanup as a scam, deceptive and highly political, other stakeholders including an Ogoni environmental activist, Celestine Akpobari, say the Federal Government means well for the people and is committed to cleaning up the polluted environment of Ogoni. He, however, blamed the delay on the inability of the coordinator of Hydrocarbon Pollution Remediation Project (HYPREP), Mr. Malvin Dekil, to implement the recommendations of the United Nations Environment Programme (UNEP) report.

A major assessment carried out by UNEP in 2011 at the request of the Federal Government revealed that the pollution from over 50 years of oil exploration in Ogoniland has impacted the environment severely. The UNEP report revealed that water in Ogoni is contaminated with benzene, a known carcinogen, which was found to be over 800 to 900 times above the limits set by the World Health Organization (WHO). UNEP, therefore, warned that inhalation of petroleum hydrocarbons and consumption of contaminated food and polluted water would affect the people’s health significantly. It then recommended emergency measures to be carried out while the report was being implemented.

On June 2, 2016, Nigeria’s Vice President, Prof. Yemi Osibanjo, on behalf of President Muhammadu Buhari, flagged off the UNEP cleanup exercise in Bodo in Gokana Local Government Area of Rivers State. Osibanjo promised that the government would expedite action to implement the emergency measures recommended in the report.

Accordingly, HYPREP was established in the Federal Ministry of Environment to achieve the stated objectives. Unfortunately, four years after Osibanjo’s visit and nine years after the release of the UNEP report, nothing has changed in the area. Findings show that the people still drink and cook with contaminated water and steadily consume polluted foods and vegetables harvested from the contaminated land.

However, after a series of reports by The Guardian on the failure of government and HYPREP to implement the UNEP report, especially the emergency measures to mitigate the effect of pollution, the agency on July 14, 2020, called for bids for water projects in Ogoni. No less than 40 firms bided to construct borehole to generate portable water in the four local government areas in Ogoniland.

Yet, six months down the line, the people still drink polluted water as the process has again stalled despite confirmation that funds have been made available to implement the exercise. Apparently piqued by these inconsistencies, Governor Wike recently lashed out at the Federal Government, reiterating that that Ogoni cleanup is deceptive and political. He then urged Ogoni people to stop believing in those who sing to them cleanup exercise songs at the turn of every election year and then disappear soon after. He wondered why cleanup never happens when elections are over.

He said the cleanup exercise songs become strident only during elections but die out after elections and wondered why Ogoni people never ask questions about the Federal Government’s failed promises.

Wike; “The Federal Government has been playing politics with the Ogoni environment remediation programme recommended by UNEP. Ogoni, having played a pivotal role in the economic development of Rivers State and Nigeria, deserves more than what is currently being offered in the area.

“When elections come in 2023, they will start another cleanup talk. You people don’t ask questions. Why is it that it’s a year of the election that Ogoni cleanup always commences. Now that there is no election, are they doing the cleanup? Watch from next year, they will start the cleanup. I’m not like the Federal Government. They promised you they would do the Ogoni cleanup. Has it been cleaned? I promised you road, have I done it? So, you can see the difference.”

But in a swift reaction, Akpobari said sufficient funds totaling over $300 million have been made available to implement the UNEP report, but he blamed the delay on HYPREP’s inefficient management team.

Akpobari said: “This is the first time that we are hearing that there is over $300 million in HYPREP account and they are not using it. If it is politicised, that money will be in the government’s account and not in HYPREP’s. So, I think it is the inefficiency of HYPREP management team.”

Continuing, he said; “When you ask HYPREP, they will say that this job has never been done in any part of the world and that it takes time to move and you don’t move the way the people are thinking, because it is a highly technical issue. So, to say Ogoni cleanup is politicised is not true.

“This is what the PDP people have been saying. They were the ones that received the UNEP report and they did not act on it. Senator Lee Maeba and some Ogoni people that were in government then promised many times but failed on their promises.”

Akpobari noted that the ongoing restructuring in HYPREP maybe as a result of observations of inefficiency made about its management to carry out its duties.

According to Akpobari; “Water was the first thing recommended in the report; bid was done but up till now, we have not had water in Ogoniland because of the cumbersome nature of the agency and also the idiosyncrasy of the Project Coordinator, Dekil. He allowed his feelings and the way he does things get in the way because he is a British-trained person. So he was applying that system here. British system does not work in Nigeria. Nigerians behave like Americans. If an American-trained person was to be the project coordinator, he will start with projects that will make the people of the community accept him, what will give him the community buy-in.

“You can imagine, the community people are not drinking clean water; they are not living in their houses and you are coming to tell them that you are doing technical bidding. It is human beings first. If you like, clean up Ogoni and turn it upside down, the human beings there must feel the impact first.

“There is $10 million in the account of HYPREP for the training of youths, who are involved in artisanal refining. They have not used that money and the former Minister of Environment, Amina Mohammed, did a foundation for the Centre for Excellency in Ogoni before she left and the project coordinator did not think that the centre is a priority. Now, the location where the Scientific Centre would have been built has been turned to federal prison.

“These are the things making people to be angry. How will prison take over a very important institute that would have brought development to Ogoniland? HYPREP coordinator did not prioritise the project. That is the problem and the people are not happy because there is no impact.”

While revealing that the Acting Project Coordinator, Philips Okpolo, appears to be correcting the wrongs, as Malvin’s tenure, who is currently on leave, expires in March, Akpobari confirmed that all the oil majors have contributed their own quota of the cleanup funds. He further disclosed that it is only the refinery that is yet to comply with its 20 per cent contribution.

But the Head, Coalition of Ogoni Women, Mrs. Patience Osarojiji, holds a contrary view to Akporabari’s. Like Wike, she argued that the Ogoni cleanup exercise has indeed been politicised.

According to her; “It is true; the Ogoni cleanup exercise has been politicised. When those who own land want to fill their pockets, they are not bothered about how the common people feel. People are fighting because of pecuniary benefits; that is why there is so much division, divide and rule in our land. The clean up is a scam; that’s why leaders of Movement for the Survival of Ogoni People (MOSOP), who are supposed to monitor the exercise, are fighting among themselves. We have over four factions of MOSOP. So, who will monitor it?

“In Alode and Osisikandu in Eleme LGA, we are still drinking contaminated water. All these areas are contaminated. If the emergency measures are not put in place, how will the people survive? And HYPREP claimed that they have finished cleaning some sites. That’s why I said it’s a scam, its politicised. How can you claim you have finished cleaning some sites when we don’t have ordinary water to drink, which is the number one emergency measure to put in place?”

Osarojiji lamented that the sad development was affecting the women and children, especially in a period of Covid-19 pandemic.

She said; “They said we should wash our hands: we are using the polluted water to wash our hands. HYPREP promised that before Christmas we will see water, but we did not. Ogoni women are dying from all sorts of sicknesses because of the contaminated water. Health facilities are not here; no empowerment. No woman is enjoying anything in Ogoni.”

Similarly, a top politician in the area, who did not want his name in print, said it is plain politics that has stalled the Ogoni cleanup.

According to him; “What is going on now in Ogoni cleanup is politics. When former President Goodluck Jonathan was there, he couldn’t do anything about the cleanup. The implementation of the UNEP report was not funded. But when President Muhammed Buhari came, he showed commitment, appointed an Ogoni son and money was released, but the young man he appointed was inexperienced and could not deliver.

“You can never know anybody fully until you give them power. Later, we realised that he was incompetent. The number one recommendation in the UNEP report is water. I can tell you that he has not done anything about water to date. He started with the process of procurement; when he was doing that process, he never secured any site, meaning that he awarded the contract. Is that not something that was designed to fail?

“So those who say that the Federal Government has not done anything are not completely right because it’s a combination of inefficiency and inexperience of our people that are to blame.”

Secretary-General of MOSOP, National Transition Council, Bari-ara Kpalap, said HYPREP is just there doing nothing while the people drink and use benzene-contaminated water. He called on the international community to prevail on the Nigerian government to provide alternative sources of drinking water and implement the cleanup report.

While speaking with The Guardian, the Minister of Environment, Dr. Mohammadu Abubakar, said the Covid-9 pandemic slowed the process of Ogoni cleanup last year but assured that government was strengthening and collaborating to facilitate the exercise this year.