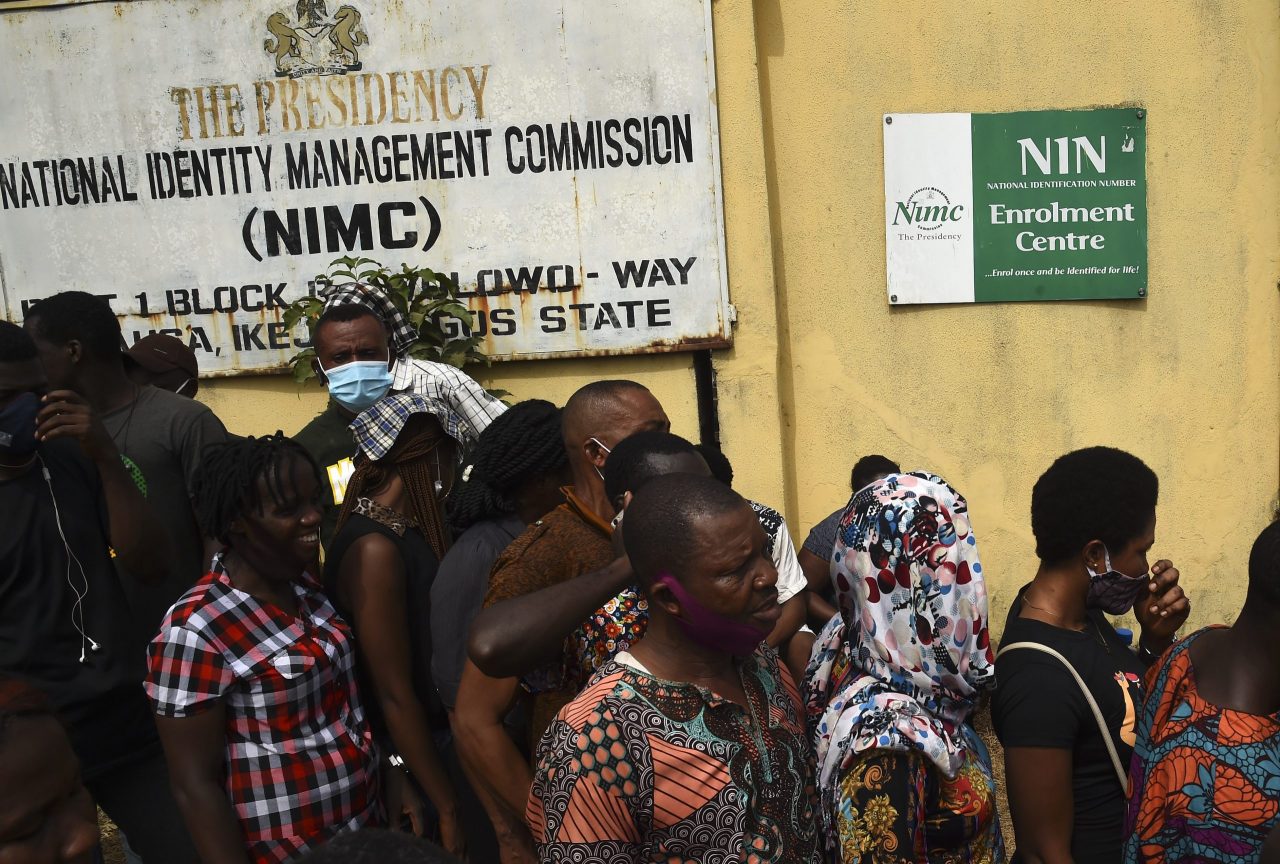 Crowds of applicants for the National Identification Number (NIN), yesterday, returned to offices of National Identity Management Commission (NIMC) as the striking workers of the commission called off their strike.

The rush by applicants, yesterday, was to beat the February 9 deadline for registration, verification and subsequent linking of NIN to Subscribers Identification Modules (SIM) cards.

In Lagos, applicants complained of slow process, inefficiency, among others.

At the Alausa NIMC office, Ikeja, it was gathered that applicants started trooping to the centre as early as 5 a.m. Those who got to the office by 5 a.m. were shocked to find a list of about 100 people already ahead of them.

An elderly man, who gave his name as Alhaji Babatunde Aderibigbe said he had come for about one week without recording any progress.

Asked why he didn’t explore the booking system, Aderigbe said: “I don’t have faith in that process. This is Nigeria! I think it is better the way I came. But it has become too stressful, especially for adults like me approaching 70. I think the process should be reviewed.”

Another enrollee, Moses Joda, complained of favoritism. “It’s like if you don’t know any person, you cannot be registered. Some people are taking in some people anyhow, even those coming very late. I don’t really understand. I got here today by 5:30 a.m. and five hours after, I have not been able to do anything,” he complained.

On the social media, a Twitter user with the handle @DrOlufunmilayo, wrote: “Yesterday, Lagos government announced closedown of Meiran Primary Health Centre due to health workers getting overwhelmed with COVID-19. Today, Lagosians have been in Alausa NIMC centre since 5 a.m. trying to get NIN. For God’s sake, what kind of madness is this? What is this insanity?”

To Natural Hair Girl @NwaniUju, “Those ones going to NIMC office are mad too. I have used a code to generate NIN for my mum. What are they going to the office for? Whatever they are looking for, they will find it.”

An official of the Alausa NIMC office, who spoke on condition of anonymity, told The Guardian the challenge was that applicants had refused to explore the booking process, “which was created to reduce crowds at the centres, and guard against the spread of COVID-19. As you can see, look at the crowd today, and it may be like that till deadline.”

At Agege Local Government Area (Maternity Centre) officials attended to only persons on appointment. They asked fresh applicants to return at the end of February for their registration.

According to one of the officials, the facility available for them was limited.
One of the officials said he was sure the government would still extend the closing date as few people had been registered while he turned down the request of a desperate man who asked him for his number.

An applicant, who spoke on condition of anonymity, called on government to create more registration points with facilities to make things easy for Nigerians.

IN Port Harcourt, large crowd besieged the Aba road office of the Commission and the COVID-19 protocols were flouted as residents struggled to be attended to.

The crowd numbering thousands overwhelmed the workers who were not more than ten. Some of the machines were not also functioning optimally, thereby making the situation more unbearable under the scorching sun.

Some of the residents, who our reporter met at the NIMC office, close to the Independent National Electoral Commission’s Office along Aba road, said they arrived at the NIMC premises before 8a.m. on Monday but by 5p.m., they were not attended due to large crowd.

Mrs. Edna Wodi, who lives at Ojike Street in Mile One, Diobu, said, “I left my house by 8am today and went to the NIMC but look at me, this is 5pm. It’s so annoying because I locked my shop to be here “

Some of the enrollees who volunteered to speak expressed delight over the resumption of the exercise. They however noted that the processes had not improved.

“We are glad the workers have called off their strike and the registration continues but the situation still remains as it was. The number of staff has not increased. The long queue is still there. The work hours still remain. So, I have not seen any thing that change,” an enrollee volunteered. 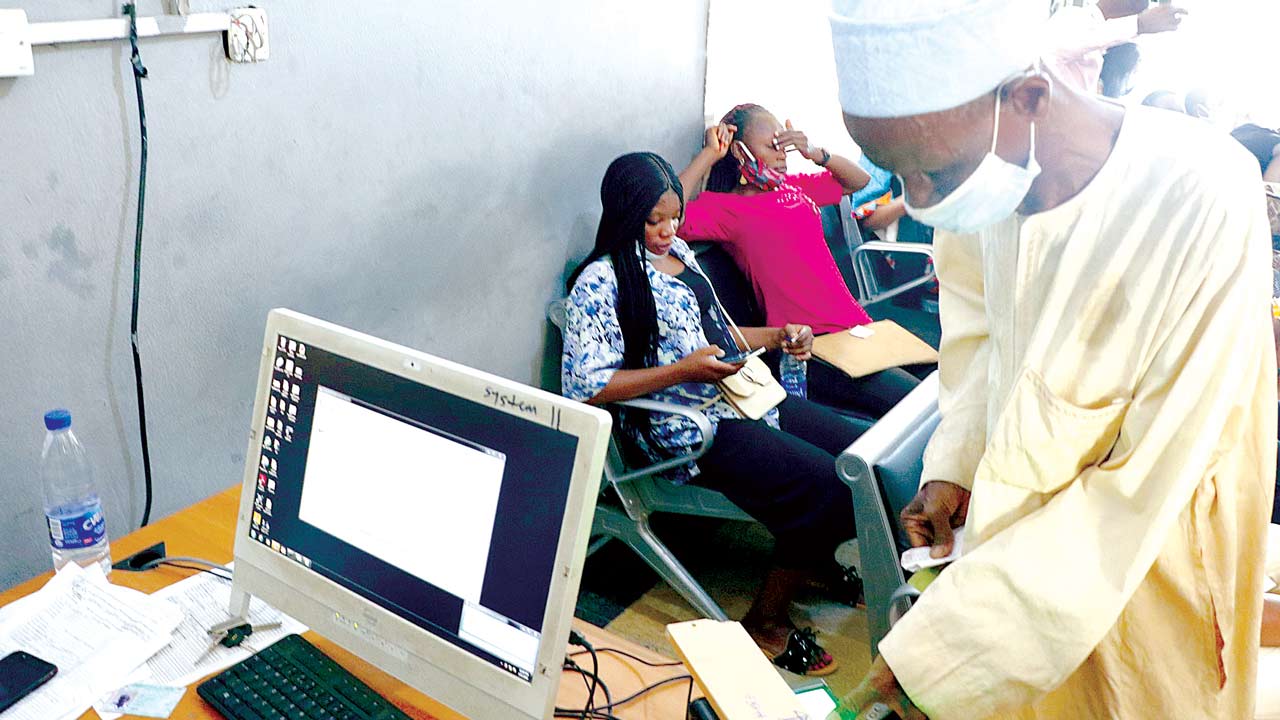 MEANWHILE, the NIMC has warned the public to beware of a fake app that purportedly links NIN to SIM cards.

In a post on its Twitter handle, NIMC dissociated itself from the app saying it belonged to fraudsters who harvest people’s NINs and Bank Verification Numbers.

“The app was not created by NIMC or the Federal Government of Nigeria. It is run by fraudsters who are currently harvesting people’s NINs and BVNs by default,” NIMC said.

The Commission advised people to protect their data and stop disclosing personal information to unauthorised persons or platforms.

NIMC, it had been announced launched a mobile app, that could be used to link seven SIM cards to one NIN.

The Minister of Communications and Digital Economy, Dr. Isa Pantami, who made the disclosure, in a television interview, said: “We developed an app, when you go online, you will see it. That app, as long as you have your NIMC number, you will only download it without visiting any office. You will be able to link up to seven SIM numbers to only one. I have already downloaded the app, launched the app, and already linked some of my numbers immediately. This is part of digitalisation,” he said.

COMMENTING on the development, yesterday, the Presidential Taskforce on COVID-19 (PTF) warned Nigerians to avoid crowding as being witnessed at NIMC centres.

It, however, said there had been no decision to postpone the NIN enrollment except otherwise decided by President Muhammadu Buhari.

Minister of State for Health, Dr. Olorunimbe Mamora, who gave the warning at the PTF briefing in Abuja, noted that overcrowding at the NIN enrollment centers across the country might be a super spreader event and blamed the development on attitudinal defect of some Nigerians.

Mamora argued that there was absolutely no cause for crowding, if only people would voluntarily comply with guidelines as issued by the Ministry of Communications.

He said, “It’s is an attitudinal issue, as the ministry of Communications and Digital Economy and NIMC never asked people to crowd the centres the way they are doing.

“It might be a super spreader event, there is no reason for what is going on under the guise of trying to get enrolled. The statement credited to me on the social media as to the suspension of the exercise is out of context, hence misleading because it bothers on national security, Boko Haram, kidnapping and other criminalities going on in the country, which are facilitated using mobile phones. What is required is voluntary compliance to the guidelines. For the avoidance of doubt, Mr. President’s order on the matter remains as being carried out by the relevant ministry.”