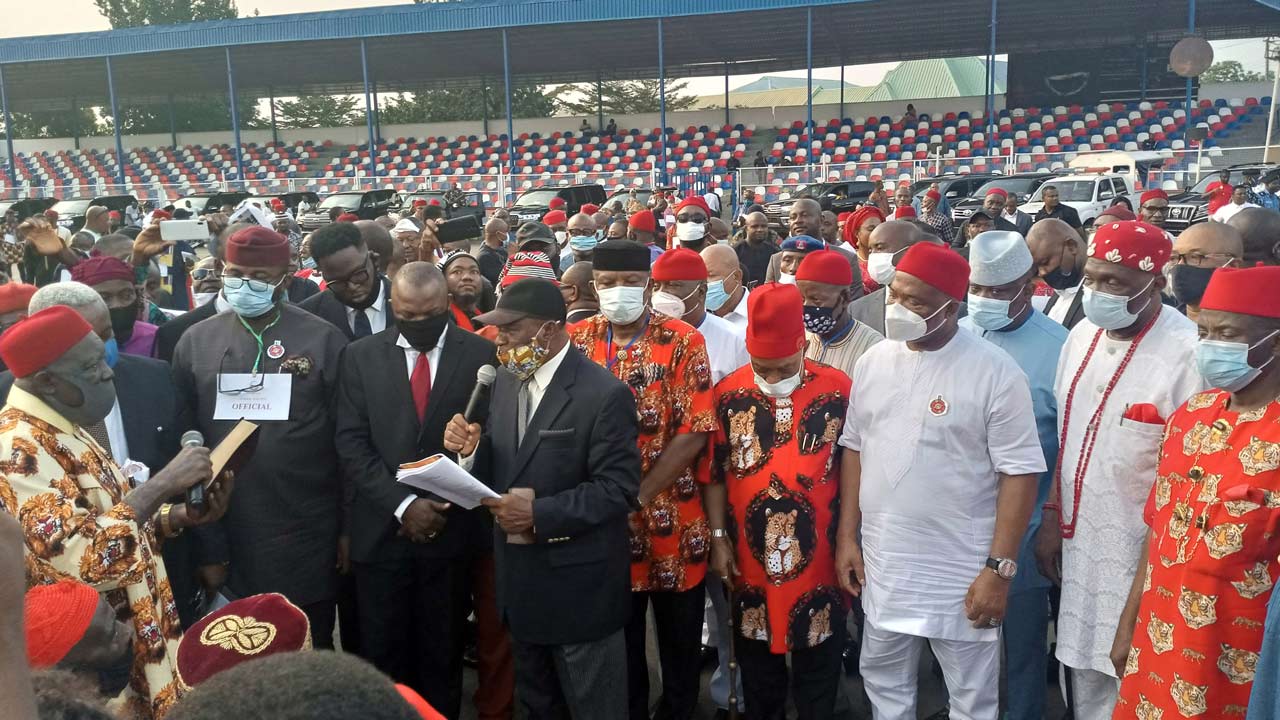 Rancour and protests yesterday followed the election of a former Nigeria’s ambassador to the United States of America (USA), Prof. George Obiozor, as the President-General of Ohanaeze Ndigbo, the largest and most influential socio-cultural umbrella body of the Igbo.

Before the first vote was cast, many had concluded that the former ambassador would emerge the winner. They believed the Imo State Government was determined to ensure Obiozor emerged the winner.

Leading contestants on Sunday morning quit the election, following alleged irregularities in the build-up to the poll.

Former secretary general of Ohanaeze Ndigbo, Dr. Joe Nwaorgu; Prof. Chidi Osuagwu and Dr. Chris Asoluka, who had registered for the contest backed out after procuring and returning their nomination forms.

Nwaorgu announced his decision to quit the process to the surprise of many of his admirers on Saturday morning. He said he would not be part of an exercise that had sold the socio-cultural body to serving governors.

He described the election as a farce and the lowest part of the Ohanaeze Ndigbo, wondering when the organisation had become a parastatal of government.

“This is not the Ohanaeze Ndigbo that we inherited from our past leaders. What is happening portends great danger and a bleak future for Ndigbo. I will not be part of the process to cause disintegration of Igboland,” he said.

Asoluka, while quitting the election stated that it was obvious “either NEC does not possess the will to rescue our dear Ohanaeze or it is complicit,” adding that “I hereby notify all of my decision not to participate any further.”

Osuagwu, while quitting the race, described the election as bizarre. He said: “This is part of the problem at the heart of Ohanaeze, we saw people could not differentiate their political interests from the Ohanaeze election. It is good to tell you that some of the procedures did not follow the guidelines, that is why we are concerned about this whole thing.”

Amid the confusion, another group of Ohanaeze Ndigbo, led by “suspended” secretary general, Chief Uche Okwukwu, announced the election of Chief Chidi Ibeh from Imo State as the new president general.

Ibeh, according to Chief Richard Ozobu, emerged alongside Okwukwu as the deputy national chairman; Okechukwu Isiguzoro as secretary general among others.

Ozobu said “We promised to give Ndigbo credible election and that is what we have done.”

PERTURBED by the confusion over the electoral process, a group of Igbo leaders under the aegis of Concerned Ime-Obi members of Ohanaeze, held a zoom meeting attended by representatives from the five southeast states, Rivers and Delta states, and called for shift in the election to resolve pending issues.

The group had also asked that the running of Ohanaeze Ndigbo be handed over to the Southeast region of Christian Association of Nigeria (CAN) for two months period while efforts would be made for another election.

They also recommended that efforts should be made to draw the attention of all key stakeholders on the need to step in and ensure that the elections are conducted in a way to unite rather than divide, permanently damage and embarrass the Igbo nation.

AT the Owerri election were Governors Hope Uzodimma and Dave Umahi of Ebonyi State, Ministers of Science of Technology, Ogbonnaya Onu; Labour and Productivity, Chris Ngige; Mines and Steel Development, Uche Ogah, among others

Obiozor garnered 304 votes to defeat other two other contestants, Dr. Valentine Okparaocha and Chief Uju Okoro who got 15 and 3 votes respectively.

Speaking to newsmen shortly after his emergence, Obiozor said his leadership would root for peaceful coexistence among the Igbo and other tribes in the country, ensure security and economic development of the southeast, among other things.