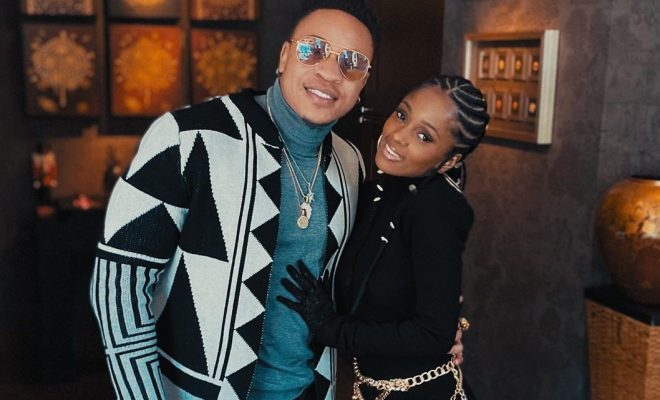 The video of the couple’s proposal has since gone viral on social media.

Rotimi who is best known for his character Dre on the hit series “Power” planned an elaborate setting for the proposal that boasted of an after-party.

The setting replicated a scene from the Coming to America movie.

In one of the clips that surfaced online, a lovestruck Rotimi is seen on one knee as he asks a startled Mdee:

“Will you marry me?”

She replied with an excited yes.

Rotimi is so inspired by his real-life chemistry with Mdee, he recently cast her to play his leading lady in the video “Love Somebody.”

The couple recently had a chat with ESSENCE about their love story.

“It feels like we have an angelic type of love that can’t be explained,” Rotimi tells ESSENCE.

Mdee, smiling as she cozies up beside him, agrees.

“We are happy that we get to share it with the world and show the world what it’s like to find love in this time where sometimes it feels almost impossible,” she says. “To find someone that you can literally call your rib.”

The star couple made their relationship pubic last year and shared how they first met.

Rotimi at the time had another date lined up before he and Mdee crossed paths.

“I actually was there with somebody else, just a weekend friend,” he admits. “She ended up getting sick. We were supposed to go to this party, and [she said] I don’t want to come. I said, ‘okay, it’s fine. I’m just going to go for 15 minutes.’ I end up going and some of my castmates were also there. That’s where I end up meeting [Vanessa.] Fifteen minutes turned into an hour and a half conversation. Nothing else mattered in the room.”