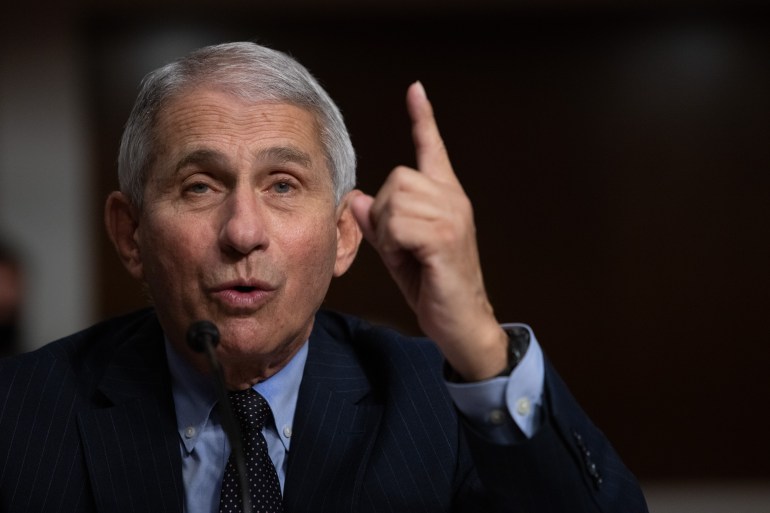 The United States government’s top infectious diseases expert is cautioning that the US will have to deal with “a whole lot of hurt” in the weeks ahead due to surging coronavirus cases.

Dr Anthony Fauci‘s comments in a Washington Post interview take issue with President Donald Trump’s frequent assertion that the nation is “rounding the turn” on the virus.

Fauci says the US “could not possibly be positioned more poorly” to stem rising cases as more people gather indoors during the colder fall (autumn) and winter months. He says the US will need to make an “abrupt change” in public health precautions.

The death toll from COVID-19 passed 230,000 last week, as daily new infections hit record highs – more than 98,000 cases were reported on Friday. Hospitalisations are also rising across much of the country.

Trump has downplayed the data and even alleged – without any evidence – that many doctors are inflating virus death tolls for profit.

“I mean, our doctors are very smart people,” Trump said at a rally on Friday in Michigan. “So what they do is they say, ‘I’m sorry but everybody dies of COVID.’”

He suggested, again without evidence, that doctors can bill more in that case.

Speaking of the risks, Fauci says he believes Democratic presidential candidate Joe Biden “is taking it seriously from a public health perspective,” while Trump is “looking at it from a different perspective”.

Fauci, who is on the White House coronavirus task force, says that perspective is “the economy and reopening the country”.

Deere says Fauci “has a duty to express concerns or push for a change in strategy” but instead is “choosing to criticise the president in the media and make his political leanings known”.

Fauci has said that in his decades of public service, he has never publicly endorsed any political candidate.

Fauci once briefed Trump on the virus almost daily but said the president no longer seeks his advice.

In mid-October, during a telephone conference call, Trump called Fauci a “disaster”.