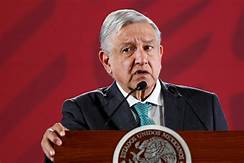 Mexico on Friday ordered the military to deploy along its southern border to block a migrant caravan that President Andres Manuel Lopez Obrador suggested was linked to the United States election.

Thousands of mostly Honduran migrants and refugees were travelling through Guatemala, heading for the US via Mexico, just weeks before a tense US presidential vote in which immigration is a key issue.

“It seems very strange to us. It’s very strange that this caravan leaves on the eve of the election in the United States,” Lopez Obrador told reporters.

“It has to do with the election in the United States. I don’t have all the elements but I think there are indications that it was put together for this purpose,” he added.

The migrants, mostly young men, surged across the border from Honduras into Guatemala on Thursday despite restrictions linked to the coronavirus pandemic.

Many were not wearing masks to protect against the spread of infection.

Some returned to their country after the Guatemalan government ordered them to be detained and deported.

Mexico will deploy hundreds of military and immigration personnel to its border to prevent the caravan entering the country, a senior government official said.

“They’re not going to cross,” Francisco Garduno, the head of the Mexican migration authority, told reporters.

Garduno said the migrants must “respect the immigration law”.

Lopez Obrador, however, said that Mexico wanted to avoid a confrontation with the caravan.

In recent years, thousands of Central American migrants travelling in large groups have crossed into Mexico, aiming to reach the US border.

US President Donald Trump, who is seeking a second term in the November 3 election, has threatened Mexico with steep tariffs if it does not do more to stop a surge of undocumented migrants.

Lopez Obrador has deployed some 26,000 troops to the country’s borders in response.

The Mexican leader has sought to maintain good relations with Trump despite the US leader’s anti-Mexico rhetoric, and chose Washington for his first foreign visit after taking office.

He said Mexico had “made every effort” not to become embroiled in the campaign for the White House.

“However, they don’t stop trying to inject the issue into the debate,” he said.

Trump’s administration on Thursday announced the US will admit a record low of 15,000 refugees in the coming year.

His Democratic rival in the November 3 election, Joe Biden, has pledged to raise the refugee cap to 125,000, saying that welcoming the persecuted is in line with US values.