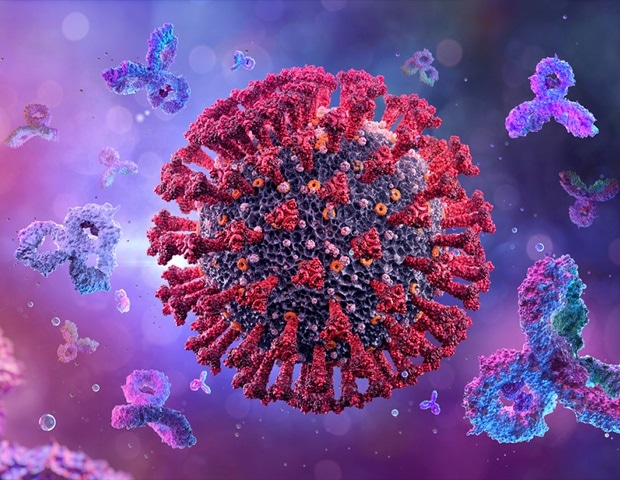 Numerous neutralizing antibodies (NAbs) have been developed to counter the severe acute respiratory syndrome coronavirus 2 (SARS-CoV-2). These have been isolated from convalescent plasma, selected for their potency, or sometimes modified to achieve a better profile of activity. A new study by researchers at the Indian Institute of Science and the University of Queensland and published on the preprint server medRxiv* in September 2020 discusses using a novel tool to identify the most effective among currently known anti-SARS-CoV-2 NAbs.

Many earlier settings have used passive immunity, the use of already formed specific antibodies, to counter HIV, malignancies, and autoimmune disorders. Now that over a hundred NAbs have been identified, it is necessary to select those most valuable for clinical use.

In most cases, the 50% inhibitory concentration, IC50, is used as the criterion to classify NAbs. This is “the concentration at which viral infectivity is reduced by 50% of that in the absence of the NAbs.” The lower the IC50, the greater the potency of the Nab. However, it is important to recognize that a Nab with a lower IC50 could have lower efficacy than one with a higher IC50 at the higher concentrations more similar to those found in the human body because neutralization efficacy is not a linear function of concentration. 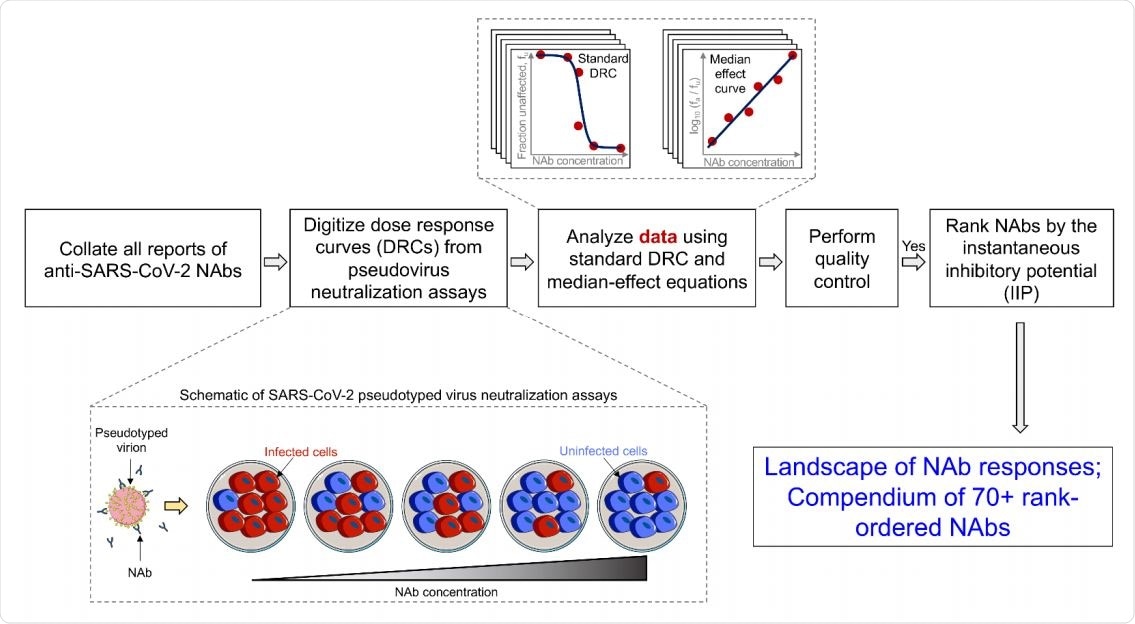 Schematic of the workflow to chart out the quantitative landscape of SARS CoV-2 NAbs.

In order to allow a more accurate comparison by taking account of this non-linear relationship between efficacy and concentration, the current researchers use a metric called the instantaneous inhibitory potential, denoted IIP, which uses both the IC50 and the slope of the dose-response curve (DRC), m. The IIP thus represents the log decline of viremia that occurs per assay when exposed to the drug at a given concentration. At equal concentrations, a higher IIP reflects greater efficacy.

The researchers used all the available data on in vitro DRCs in this area and estimated the IC50 and m on this basis, finally calculating the IIP. They then carried out in vivo tests to explore the range of responses in COVID-19 patients, as well as through virtual plasma samples.

The researchers looked at over 70 NAbs, the most promising of many. These had a wide range of IC50 values from ~10-3 μg/ml to ~140 μg/ml, just like the value of m from ~0.2 to 2.3. They explored the reliability of this variation across pseudoviruses, cell lines, and assay conditions across studies, finding that it was an intrinsic attribute of the NAbs. Moreover, the variation in m and in the IC50 are independent of each other.

At a uniform dose, they found a range of IIPs, which reflects the broad spectrum of NAb efficacies seen in individual patients. They also rank-ordered the NAbs and found that a high IIP was associated with a low IC50 and a high m. They found that five NAbs had IIP over 5, indicating the most promising NAbs, though the threshold for clinical success in terms of IIP is unknown as of now.

These studies also underlined the importance of m as a predictor of neutralization efficacy, rather than IC50 alone. An important observation was that neither IC50 or m alone are sufficient to evaluate NAb efficacy. Secondly, the range of estimated IIPs is a benchmark for future NAbs, which should have IIP of 5 or more to compete with highly potent NAbs.

The researchers used various analyses to find the nature of the correlation between IIP and antibody activity. They explored the link between binding affinity (which decides IC50), cooperative effects (which influences m values), and so on. Still, in most cases, the virus is too new for these to have been elucidated so far.

One example is the powerful NAb 47D11 that blocks virus entry but allows the spike-ACE2 interaction that is the precursor to virus binding and entry. Thus, in the future, it would be necessary to establish the molecular details of viral entry so as to design even more powerful NAbs based on the common characteristics of those antibodies that have high IIPs.

The current study is based on pseudovirus assays for ease of analysis, and because wildtype virus assay data is not available. Single-round assay data is used due to the difficulty of estimating m with multiple rounds as well as possible confounding effects of viral kinetics.

Despite these limitations, the researchers say that comparisons of the in vitro and in silico results “suggest that our landscape was representative of the spectrum of NAb responses within individuals.”

Secondly, this paper is not meant to accurately measure the actual neutralizing potency of these NAbs in vivo, but it “collates, compares, and ranks available NAbs” to present a method that can help compare current and future NAbs for preventive and therapeutic interventions in SARS-CoV-2 infection.