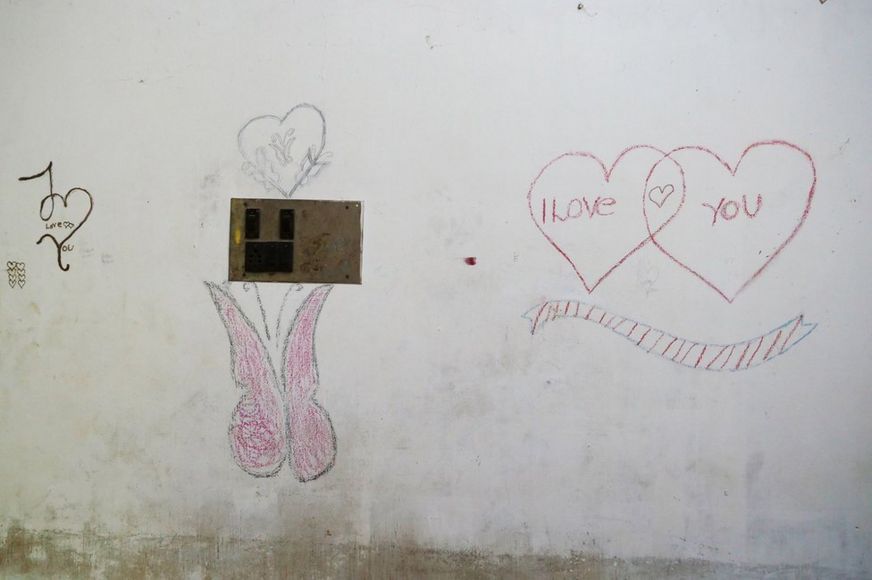 Every weekend for two years, men would come home and rape her, the 12-year-old told counsellors. Some were known to her father, some were not.

Warning: This article contains details some readers may find distressing.

It all began, she said, with her father inviting friends home for drinks. The inebriated men would tease and grope her in front of her parents. Sometimes, she said, the men would disappear into their single, musty bedroom with her mother.

Then one day, the girl recounted, her father pushed her into the bedroom with one of his friends and locked the door from outside. The man raped her.

Childhood soon became a nightmare. Her father would call up men, booking their time with his daughter, and taking money from them. Counsellors believe the girl was raped by at least 30 men since then.

Four men, including her father, have been arrested in connection with the case. They have been charged with rape, using a child for pornographic purposes and sexual assault. All have been denied bail.

“I don’t remember any faces. It’s all a blur,” she told them.

The family lived in a fairly prosperous town in southern India known for its lush hills, clean air and freshwater streams. But the good fortunes of their hometown seemed to have passed her family by.

On that day in September, the school received word from a couple of teachers who lived in the same neighbourhood as the girl.

“There’s something wrong with her family and something is going on in her house. Try talking to her,” they said.

The school management immediately called a counsellor from a women’s assistance group.

Next morning, the counsellor arrived.

They sat face-to-face in the staff room. Upstairs, her mother, unaware of what was going on, attended a routine parent-teacher meeting.

“Tell me,” the counsellor said to the girl, “about your family and your life.”

They spoke for four hours.

The girl said she was have a tough time at home because her father was jobless. The family could be evicted at any time for not paying rent, she said, and began sobbing.

Then she grew silent. The counsellor told her about the gender classes in her school and how child abuse was common.

“Something is happening in my home also. My father is abusing my mother,” the girl interjected.

The counsellor asked if she could share some details.

More and more men began coming to her home. After late drinking sessions, they would sexually abuse her, she said.

The counsellor asked her whether she knew about contraceptives which helped avoid pregnancy and diseases.

That was the first time, halfway into the conversation, she admitted to having sex.

After that she told the harrowing story of a lost childhood.

“Men would come and take my mother into the bedroom. I thought this was normal. And then my father pushed me into the room with strangers,” she said.

Sometimes her father forced her to take nude pictures of herself and send them to the men who visited her.

Earlier this year, she said, her parents panicked after she missed her periods for three months. They took her to a doctor, who ordered an ultrasound test and prescribed some medicines.

By now, the counsellor was convinced that the girl was a victim of serial rape. She called in child welfare officers, and told the girl they were taking her to a shelter home. She appeared to be unfazed.

Her mother, coming out of her meeting with the teachers, saw her daughter being taken into a car and screamed.

“How can you take my daughter away?”

The counsellor told her they were taking her away because she had “some emotional problems” and needed counselling.

“Who are you to counsel my daughter without my permission?”

Her daughter was already on her way to the home. For the past two months, she has been living there with other girls – all victims of sexual abuse.

India has a shameful record in the sexual abuse of children. The majority of abuses are committed by people known to victims, such as relatives, neighbours and employers, according to official records.

In 2017, the most recent year for which data is available, there were 10,221 rapes of children recorded in India. Crimes against children in the country have been steadily rising in recent years.

A counsellor said she had helped transport a heavily pregnant 15-year-old girl – who had been raped by her father – to her exam hall.

“When we asked the girl to surrender the child when it was born, she said, ‘Why should I give away my child? This is my father’s child. I will bring up the child,'” the counsellor said.

At the shelter, the girl featured in this article slept endlessly for the first few days. Then she scribbled notes on how much she loved her Amma (mother).

Her mother says her daughter “made up this story [of sexual exploitation] because she had been fighting with us and wanted to teach us a lesson”.

Now she is the only occupant of an empty house – her husband in prison awaiting trial, her daughter in a shelter.

“I am a caring mother. She needs me,” the girl’s mother told the BBC.

The paint is peeling from the grimy walls. In her absence, the walls are where her daughter’s memories live. “She would draw and scribble on the walls. That’s all that she did,” her mother said.

“Friends. If I could openly express my innermost feelings then it would be an achievement in itself,” the girl had written on paper and pasted on a door.

A few months ago, mother and daughter had a fight.

When the girl got back from school, she took some blue pastel, drew the picture of a palm tree and house with a chimney spewing smoke on the front door. It was what a lot of girls at her age would draw from imagination.

Then she wrote a note of apology hurriedly on the door and went out.