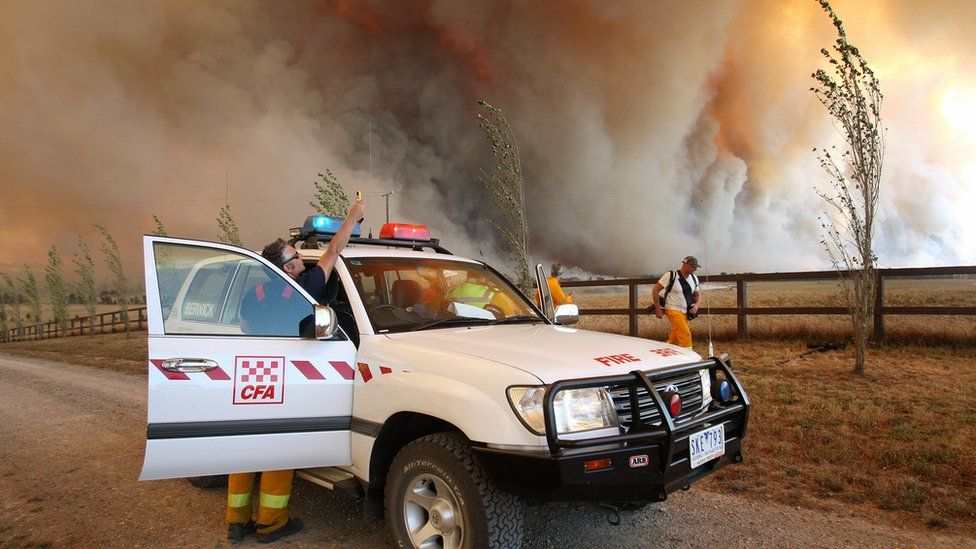 Ten years ago, Australia experienced its worst-ever bush fire disaster when 173 people died across the state of Victoria. Immediately branded “one of the darkest days in Australia’s peacetime history”, Black Saturday has left a profound legacy. Sharon Verghis reports.

“It was like the gates of hell. There is no other way to describe it.”

For Tony Thomas, 7 February 2009 began as another ordinary day. It had been a summer of record-breaking temperatures, prompting days of safety warnings.

But Mr Thomas wasn’t overly concerned; they had had scorching days like this before.

In the lush, peaceful hills on the outskirts of tiny Marysville, about 90 km (55 miles) north-east of Melbourne, he and wife Penni had carved out a fruitful life running a bed and breakfast on a 60-acre property.

His in-laws had arrived for a birthday lunch. It was a pleasant gathering, despite the suffocating heat. But in the late afternoon, they spotted smoke in the west. Going for a closer look, they saw fire.

“It came out of the forest behind us on the other side – at 100k [kilometres] it just roared towards us,” Mr Thomas.

At 18.45, the fire hit – “and pretty hard”. Mr Thomas’s family and the B&B guests ran for shelter in the house as he, his brother-in-law and an employee battled the fire. It was effectively three men with buckets and garden hoses against a roaring, wind-whipped blaze.

At 21.30, another wind change swung the fire towards the hay shed: “That threw flaming hay bombs at us for the next hour or so, massive embers and hay landing on us.”

“When you’ve got 20 to 30 metre-trees burning and the flames are well above that, like a huge ball…” his voice trails off.

“Why people say gates of hell is because everything turned from light to dark very quickly – the sun got blocked out by the smoke.

“The only thing you could see is the glow of the fire through the smoke. We were choking. We only had large tea towels which we were wetting down constantly and wrapping around our faces so we could breathe.”

Nearby, David Baetge was also fighting for survival on his property near the town of Buxton, directly adjacent to a large state park.

Armed with a comprehensive fire plan and previous firefighting experience, he had seen the smoke but chosen to stay. Like Mr Thomas, the decision would almost cost him his life.

Even for a bush fire veteran, he was shocked at the speed of the fire as it raced towards him. “The sky was iridescent red with a deafening roar like standing next to a 747 jet,”

“It was like being inside a cocoon of smoke with a maximum visibility range of about 30m and the whole of this hemisphere in every direction was glowing cherry red.” He said it was “like being sandblasted – but with burning embers”.

All through this once-bucolic landscape, others faced similar struggles.

Karen Curnow was among them. As her house caught fire, she fled in her car with her old dog, hurtling over and around burning trees, guilt-struck at having to leaving her panicked horses behind.

Nearby in Kinglake West, local artist Michelle Bolmat was also making a mad dash to safety.

“The ash started to fall, and the darkness came… it became completely black everywhere,” she said. A tree came down in front of her; but as the heat started to build, she revved her engine and drove over it. “I looked back and saw the fire coming.”

All four got through that nightmare night.

But when the sun rose the next morning, it was eerily quiet. The lush landscape was gone.

“Our world turned from beautiful colours to black and grey,” Mr Thomas recalls. “There wasn’t a spot on the property that wasn’t burnt and it was the same across the whole area.”

Kinglake suffered the heaviest toll, with 120 perishing. In Marysville, 39 people died – 34 of them locals – and the town was effectively obliterated.

After the final embers were doused (the Black Saturday fires continued to 14 March), the true scale of the fires was revealed.

About 400 blazes had burned, most sparked by faulty power lines and lightning, but there were also cases of arson.

A total of 173 people died – Australia’s deadliest ever bush fire event. It left several hundreds more injured, more than 2,000 homes destroyed, and more than 7,500 people displaced. The RSPCA estimated that up to one million animals died.

It was unprecedented – even for a country long used to bush fires.

Over the years, Australia has been hit with several deadly blazes. But the Black Saturday fires of 2009 were singular in their ferocity – equal to 1,500 atomic bombs.

So what made this event so severe?

Kevin Parkyn, a Bureau of Meteorology senior forecaster, says it was a combination of record temperatures, unusually strong, howling north-westerly winds in excess of 100km/h (60 mph), and a tinder-dry landscape courtesy of a long-running drought. In Melbourne, the temperature reached 46.4C.

“That’s a record for Melbourne in 100 years,” Mr Parkyn says. “When you went outside, there was just this blast of hot air – it was like having a hairdryer to the face.”

“And all these fires joined together to become this massive fire area – which we call pyrocumulonimbus – that started generating its own lightning,” Mr Parkyn says. “And of course, lightning started more fires.”

The result was intense temperatures capable of melting metal: “It was almost like a living, breathing beast.”

Did climate change play a role? Mr Parkyn refers to his scientific training: he says it would be hard to say there’s no link given the record temperatures now being experienced in Australia in particular, and the frequency of extreme weather disasters internationally. He points to last year’s California fires, the US state’s deadliest, as one example.

The damage from Black Saturday was also exacerbated by urbanization, he says. Risk Frontiers, a research center, has estimated that nearly a million addresses in Australia are located less than 100 m from bush-land.

In the aftermath, a royal commission inquiry was announced, resulting in widespread changes in bush fire preparation and protocols. The inquiry put the financial cost of the disaster at A$4.4bn (£2.4bn; $3.14bn).

Survivors also secured a $500m payout – the biggest class action settlement in Australian legal history. But this didn’t account for the invisible toll.

The Beyond Bush-fires report, which surveyed more than 1,000 people affected by the fires, found evidence of significant mental health issues including depression, post-traumatic stress disorder (PTSD) and severe psychological distress. The rates were significantly higher than what would be expected in the general population, it found.

Lead researcher Prof Lisa Gibbs, from the University of Melbourne, likens the disaster to a fractured window: the cracks spread far and wide, magnified by the small rural populations. She has seen a measurable increase in domestic violence along with mental health issues.

Out of the embers, however, some good has also come. Australia is now significantly better prepared for fires, with new measures including redesigned building codes and improved warning messages.

Internationally, Australian researchers are now leading the way in many firefighting technologies – from tanker perseveration strategies to a world-leading electrical-fault study. The Beyond Bush-fires report is now used internationally.

Regeneration and growth has taken place on a more personal level as well. Mr Thomas is amazed by the resilience of the locals. Communities have rebuilt, the bush has regenerated.

For Karen Curnow says it gave her a chance to start anew: “I don’t see myself as a victim or a survivor. I just consider myself a very lucky person.”

This week, solemn events have marked the anniversary of the tragedy.

But for many scarred directly by Black Saturday, there will be relief when Thursday is over and people can move on, Mr Thomas says. Marysville is slowly recovering but “it will never be the same town”.

“But as a community we stick together,” he says. “We’re still here. We’re still standing.”