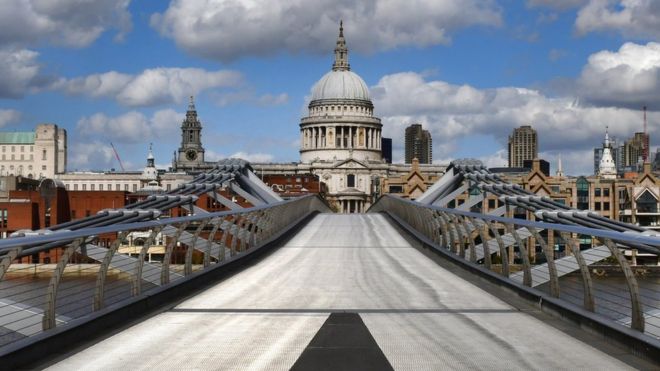 The team at Imperial College London said the “death toll would have been huge” without lockdown.

But they warned that only a small proportion of people had been infected and we were still only “at the beginning of the pandemic”.

Another study argued global lockdowns had “saved more lives, in a shorter period of time, than ever before”.

The Imperial study assessed the impact of restrictions in 11 European countries – Austria, Belgium, Denmark, France, Germany, Italy, Norway, Spain, Sweden, Switzerland and the UK – up to the beginning of May.

By that time, around 130,000 people had died from coronavirus in those countries.

The researchers used disease modelling to predict how many deaths there would have been if lockdown had not happened. And the work comes from the same group that guided the UK’s decision to go into lockdown.

They estimated 3.2 million people would have died by 4 May if not for measures such as closing businesses and telling people to stay at home.

“Lockdown averted millions of deaths, those deaths would have been a tragedy,” said Dr Seth Flaxman, from Imperial.

Their equations made several assumptions, which will affect the figures.

They assume nobody would have changed their behaviour in response to the Covid threat without a lockdown – and that hospitals would not be overwhelmed resulting in a surge in deaths, which nearly happened in some countries.

The study also does not take into account the health consequences of lockdowns that may take years to fully uncover.

The model also predicted that the outbreak would be nearly over by now without lockdown, as so many people would have been infected.

More than seven in 10 people in the UK would have had Covid, leading to herd immunity and the virus no longer spreading.

Instead, the researchers estimate that up to 15 million people across Europe had been infected by the beginning of May.

The researchers say at most, 4% of the population in those countries had been infected.

“Claims this is all over can be firmly rejected. We are only at the beginning of this pandemic,” said Dr Flaxman.

And it means that as lockdowns start to lift, there is the risk the virus could start to spread again.

“There is a very real risk if mobility goes back up there could be a second wave coming reasonably soon, in the next month or two,” said Dr Samir Bhatt.

Meanwhile, a separate study by University of California, Berkeley, analysed the impact of lockdowns in China, South Korea, Iran, France and the US.

Their report, also in Nature, says lockdown prevented 530 million infections in those countries.

Just before lockdowns were introduced, they said cases were doubling every two days.

Dr Solomon Hsiang, one of the researchers, said coronavirus had been a “real human tragedy” but the global action to stop the spread of the virus had “saved more lives, in a shorter period of time, than ever before”.