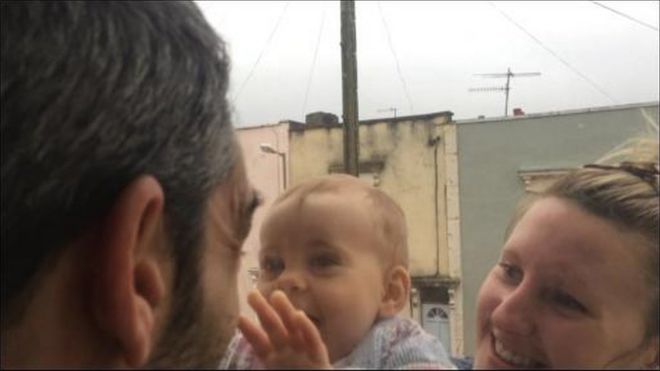 David Harris’s world has shrunk to the size of his front room.

Seven weeks ago he developed Covid-19 symptoms that he describes as being like a bad flu.

That was when the freelance architect, 42, first began to isolate himself at the home in Bristol he shares with his wife and baby daughter.

After a week or so he started to feel better, but two weeks later his symptoms returned, much to his surprise.

“It’s been a bit of a mini-saga of a recurring wave of symptoms which I wasn’t expecting at all,” he said.

“The second wave was much worse – the same flu symptoms, but also with shortness of breath, and that’s why I was confident it was coronavirus.

“Then I had two weeks where I thought I was getting better, I was just very tired.

“And then on week seven, I relapsed again and had my third wave, luckily much milder but still significant.”

Working on the basis it was better to be safe than sorry, David continued to self-isolate, changing into clean clothes on the rare occasions he left the front room to visit the bathroom, and eating and sleeping alone.

His wife would bring their 10-month-old daughter Millie to the window of the front room so David could see her through the glass.

The illness left David exhausted and uncertain what was going to happen next.

“Probably one of the most stressful things is trying to work out at what point you ask for help.

“You don’t want to pester the NHS, because there are obviously people in much worse situations than me.

“But certainly, at my weakest moment I didn’t want to fall into the trap of not asking for help and then something bad happening because you didn’t ask for help.

“When I first relapsed, when I first got worse, it’s quite a scary experience because you don’t know if that means you’re going down, down, down.

“So it is quite scary to get worse when you thought you were getting better.”

Felicity, 49, from London, is six weeks into her recovery after first falling ill with Covid-type symptoms.

But like David, her experience has been far from smooth.

“I think the hardest part was having gone through the first 10 days of being very sick and thinking I was getting better, things then getting much, much worse again.

“So it was actually in the fifth week of being ill that my partner had to call A&E because I was experiencing such horrific abdominal pains that I was just calling out in just extreme agony.

“It’s so difficult to know, is that the work of the virus? Is it the immune system’s response? Is it ongoing inflammation?

“I had no problems in my stomach before falling sick, but week five was just horrendous.”

Neither Felicity nor David has been tested for Covid-19, but both were told by doctors they probably had the virus.

They have also been assured they are no longer infectious.

But Felicity struggled to shake off her symptoms and the weeks of illness have taken their toll.

“I spend a huge amount of time in bed trying to recover.

“This entire experience, of being sick and trying to recover, has been mentally overwhelming.”