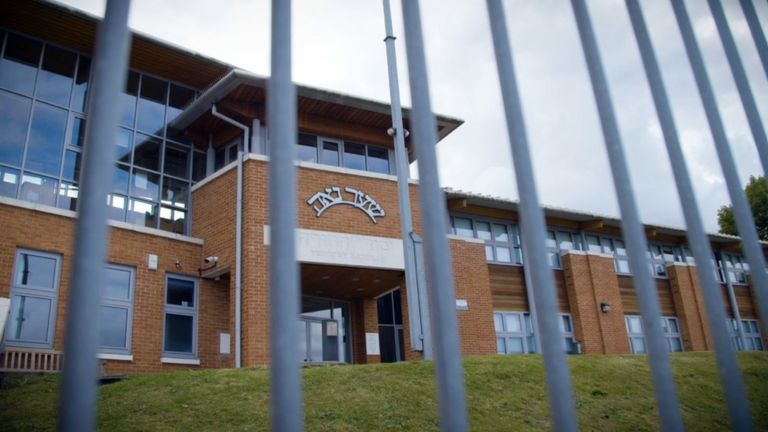 Two Orthodox Jewish secondary schools in London have been accused of pressurising parents into taking their children out of sex education lessons.

The BBC has seen an email and heard a recording of the state-funded schools explaining how to withdraw pupils from mandatory relationships and sex education classes, which begin in 2020.

One school referred to a wish to stop the teaching of LGBT issues.

But it said “accusations of coercion” were “entirely false”.

“The problem is the government is making the subject mandatory in September 2020. However, parents have the right to opt out,” it reads.

“Please exercise your right to prevent it being taught by responding to this email and saying that you do not wish your daughters to receive lessons in RSE.”

The woman told the BBC she was “disgusted”.

“I thought that my kids’ school was pretty open as Orthodox schools go,” she added.

Parents across England will have the right to withdraw their children from the sex education element of the secondary school lessons, but that decision should not be influenced by pressure from a school.

In primary schools, only Relationships Education (RE) is to be taught.

The mother believes the email was “designed to put a stop to RSE being taught” as a whole at the school, including the teaching of LGBT issues.

Lubavitch Senior Girls’ School told the BBC that if the parent concerned lodged her complaint according to its complaints policy, then it would be fully investigated. But she said she was too scared to do that.

The programme also obtained a recording from a different woman, after she was contacted by her child’s state-funded school.

In the phone conversation, the staff member can be heard telling her: “We need parents to formally say, ‘I do not want you to teach my child about single-gender relationships or sex education within the school’, unless you do as a parent want that.”

The mother – who did not wish to be identified – was asked to write a letter confirming this, which she said she did as she was “too scared” not to.

“Even though I thought it was imperative for my children to be given sex education, I felt I had to write it because I didn’t want the school to think I don’t agree with them on this.”

She said she feared that within the community she’d “be thought of as not Jewish or completely weird, and I know I’d be alienated or ostracised.

“The truth is our children need sex education more than any other child in the country because our community is so insular,” she added.

The school, Yesodey Hatorah Senior Girls’ School, said in a statement: “The vast majority of our families expect sex education to be given privately, within the family, at home. They do not expect their children to be given sex education in a school classroom.

“It is therefore very important that we let parents know that their child will be given sex education at school – unless they opt out.”

It added it was merely giving parents information on how to withdraw pupils were it their choice, adding: “Accusations of coercion against our school are entirely false.”

‘We didn’t learn about reproduction’

One woman, now in her 20s, who attended Yesodey Hatorah, said textbooks had been redacted when she was a pupil, with words “blacked out”.

She was taught about sex only weeks before her wedding at age 19, by a woman sent to give her bridal lessons.

She eventually fled before the marriage and left the community.

Layla Moran, the Liberal Democrats’ education spokesperson, called for the Department for Education to “have its own investigation into these schools”.

“They clearly don’t want to teach these subjects. That is counter to the guidelines, but it is also counter to the spirit of the Equality Act which is the very same act that protects religious freedoms,” she added.

Ms Moran said that if further investigations did find either state-funded school to be refusing to teach the national curriculum or “unduly influencing its own parental community”, it would need to be “seriously looked at”.