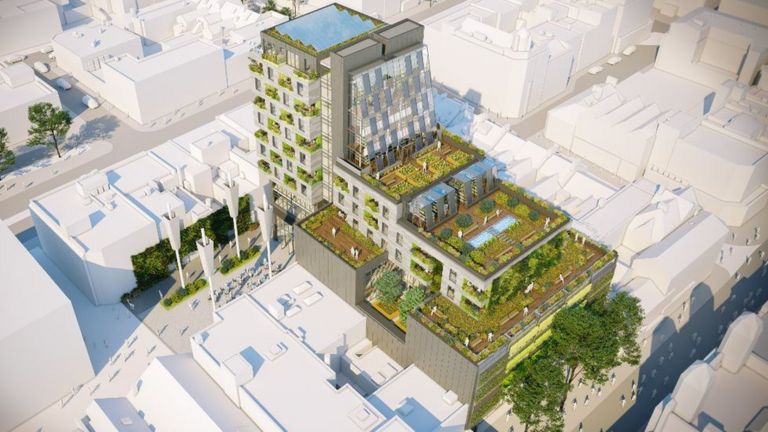 Residents could be able to grow vegetables in vertical greenhouses, have fish tanks in the basement and potentially produce honey on the roof of a planned city centre development.

The proposal is for the old Woolworths store on Swansea’s Oxford Street.

Developers Hacer believe Picton Yard, which will be a mix of homes, shops and offices, is unique due to all of the elements included in the plans.

They hope building work will start in April 2020 and take 18 months.

A planning application has been submitted to Swansea council.

It hopes to reconnect building users and visitors with nature in the urban environment, an idea known as “biophilic living”.

The longer term goal is to change peoples’ ideas about urban living, and to monitor the health and well-being benefits of living alongside nature.

Marta Lopez of Powell Dobson Architects said she wanted to use biophilic living to “create a template for urban living, which encourages us to rethink the way we live in cities and to reconnect with nature”.

“Biophilic living is our response to two current and very important issues: the global climate emergency that we are facing and the quick growth in the urban population,” she said.

“We believe we can no longer design buildings as usual.”

The Woolworths site, which now houses Poundland, will remain in place with the rest of the development built on top and behind, up to 12 storeys at the highest point.

There would be a rooftop garden, “living walls” and balcony planters for each of the 42 apartments.

The development would also have upside down umbrellas to collect rainwater for irrigation and flushing the toilets, while fish waste would be used on the allotments.

Residents will receive help from experts for all the growing processes in the four-storey greenhouses which will be run as a not-for-profit community farm.

Some of the vegetables grown – including peppers, salads and herbs – would be sold on an on-site farm shop.

Visitors would also be able to view exhibitions about the technology and there will be a digital display showing statistics on how much energy is being produced and consumed.

The project has received a £4m grant from the Welsh Government as part of a £30m fund for innovative housing.