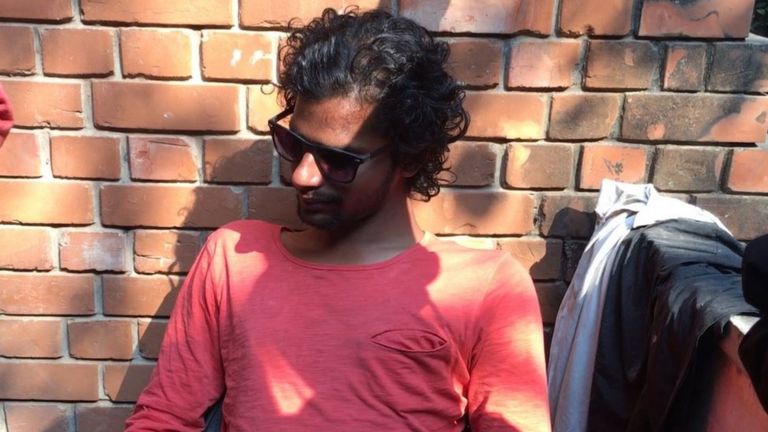 Thousands of students protesting a hostel fee hike have brought one of India’s most prestigious universities to a standstill for almost a month. BBC Hindi’s Vineet Khare spent a day at Jawaharlal Nehru University (JNU), to find out more.

“I told the policeman I was a blind student. I asked him to stop hitting me as I couldn’t even run away. But he said why did you join the protest if you were blind?”

Shashibhushan Samad is lying on the bed at his JNU dorm room, recounting a protest rally on Monday where thousands of students clashed with police. Many received injuries and had to be taken to hospital.

In a video that has since gone viral, Mr Samad can be seen removing his glasses to show policemen that he cannot see, but he is still pulled away.

For almost four weeks now, students have been protesting against an increase in accommodation fees at the top university.

They will also have to pay for other services – such as electricity and sanitation – which they say they have never had to do before.

Many say that the new structure is prohibitive, particularly for students from poorer backgrounds, and will affect its standing as an inclusive institution.

A renowned centre for teaching and research that provides education at a fraction of the cost charged by its private counterparts, the government-run JNU is a highly coveted university.

Its alumni hold sway in the bureaucracy, journalism, the police and a host of other public and private sector jobs.

Private education in India is still unaffordable for the majority of the country’s population and jobs in government institutions are limited. JNU, its supporters say, plays an important role in remedying that.

“The democratisation of the elite has long-term consequences for the healthy development of Indian society. So we need a lot more institutions like JNU,” said former vice chancellor Dr YK Alagh.

Ali Javed, a student, has surveyed 463 students on campus and his findings are doing the rounds among the protesters. The survey claims that a “significant percentage (42%) of students fall below the annual household income of 144,000 rupees ($2,000)”.

“There are students who go hungry, walk miles instead of hiring a taxi and wear damaged shoes to save money. Some work shifts to pay back family debts. Can we not have an institution where students from the marginalised communities can study?” Mr Javed said.

The JNU administration says a revision of fees had been due for years and that dorm room rent had not been “revised in the last three decades”.

Nearly 8,000 students study at the university, of which about 60% live on campus, say students.

At an earlier protest, students gathered outside an auditorium to attract the attention of a federal minister who was inside but they were forced away by security forces who used water cannons to disperse them.

Things went south at the latest stand-off on Monday, where police used barricades and a large force to scuttle a planned student march to the parliament. The police response led to scores of injuries among students.

MS Randhawa, a senior police officer in Delhi, said that police “exercised maximum restraint” and “students may have been injured as they tried to break down barricades”.

But the university, seen as a bastion of the political left by many, has long been in the thick of controversy. Students at JNU have been reviled by critics – most of whom are from the upper-middle classes – for being “freeloaders”, “parasites” and a burden on taxpayers.

These narratives have resurfaced following the latest student protest.Students protesting the arrest of Kanhaiya Kumar in 2016

The present chaotic situation at JNU has meant that many students are left uncertain about their future.

“My father hasn’t been able to process the fee hike,” she said. “My younger sister and brother also want to study at JNU, but how can they study here with this fee hike?”