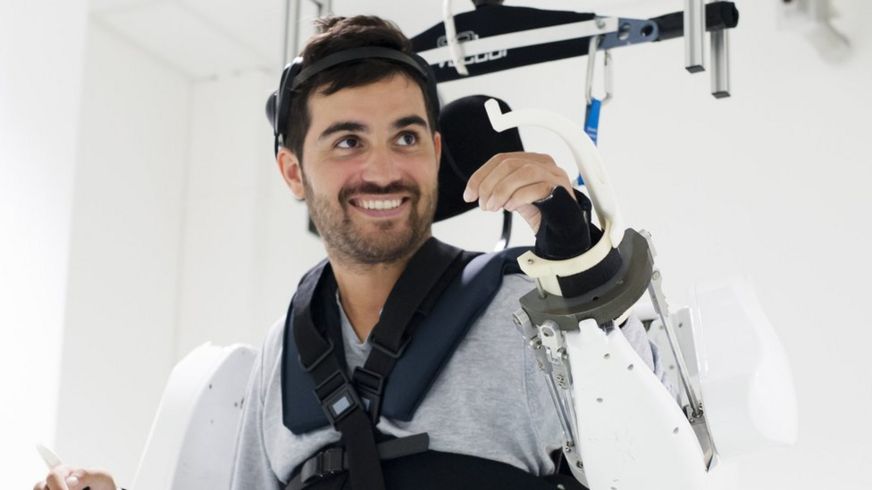 A man has been able to move all four of his paralysed limbs with a mind-controlled exoskeleton suit, French researchers report.

Thibault, 30, said taking his first steps in the suit felt like being the “first man on the Moon”.

His movements, particularly walking, are far from perfect and the robo-suit is being used only in the lab.

But researchers say the approach could one day improve patients’ quality of life.

How does it work?

Thibault had surgery to place two implants on the surface of the brain, covering the parts of the brain that control movement

Thibault has to be strapped into the exoskeleton 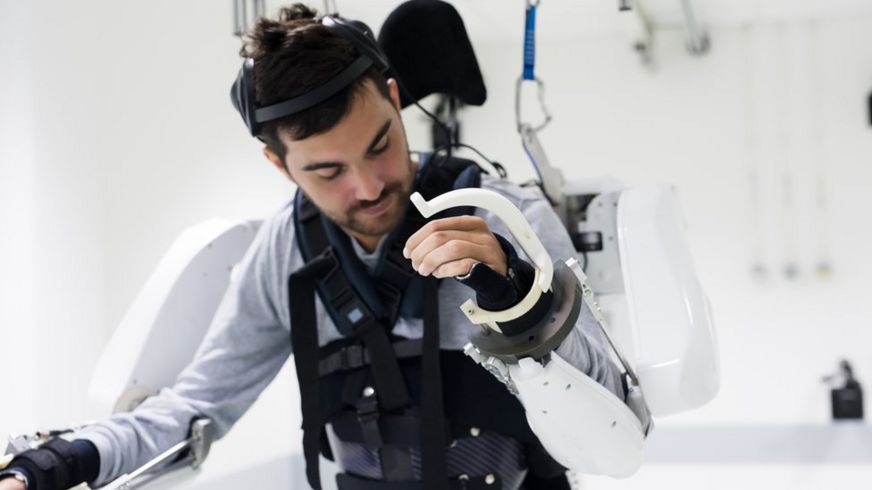 And he can control each of the arms, manoeuvring them in three-dimensional space

How easy was it to use?

Thibault, who does not want his surname revealed, was an optician before he fell 15m in an incident at a night club four years ago.

The injury to his spinal cord left him paralysed and he spent the next two years in hospital.

But in 2017, he took part in the exoskeleton trial with Clinatec and the University of Grenoble.

Initially he practised using the brain implants to control a virtual character, or avatar, in a computer game, then he moved on to walking in the suit.

“It was like [being the] first man on the Moon. I didn’t walk for two years. I forgot what it is to stand, I forgot I was taller than a lot of people in the room,” he said.

It took a lot longer to learn how to control the arms.

“It was very difficult because it is a combination of multiple muscles and movements. This is the most impressive thing I do with the exoskeleton.”

How good is the exoskeleton?

The 65kg of sophisticated robotics is not completely restoring function.

However, it is a marked advance on similar approaches that allow people to control a single limb with their thoughts.

Thibault does need to be attached to a ceiling-harness in order to minimise the risk of him falling over in the exoskeleton – it means the device is not yet ready to move outside the laboratory.

“This is far from autonomous walking,” Prof Alim-Louis Benabid, the president of the Clinatec executive board, told BBC News.

“He does not have the quick and precise movements not to fall, nobody on earth does this.”

In tasks where Thibault had to touch specific targets by using the exoskeleton to move his upper and lower arms and rotate his wrists, he was successful 71% of the time.

Prof Benabid, who developed deep brain stimulation for Parkinson’s disease, told the BBC: “We have solved the problem and shown the principle is correct. This is proof we can extend the mobility of patients in an exoskeleton.

“This is in [the] direction of giving better quality of life.”

What is the next step?

The French scientists say they can continue to refine the technology.

At the moment they are limited by the amount of data they can read from the brain, send to a computer, interpret and send to the exoskeleton in real-time.

They have 350 milliseconds to go from thought to movement otherwise the system becomes difficult to control.

It means out of the 64 electrodes on each implant, the researchers are using only 32.

So there is still the potential to read the brain in more detail using more powerful computers and AI to interpret the information from the brain.

There are also plans to develop finger control to allow Thibault to pick up and move objects.

He has already used the implant to control a wheelchair.

Are there more sinister roles for this technology?

There are scientists investigating ways of using exoskeletons to enhance human abilities, a field known as transhumanism, rather than overcome paralysis.

“We are absolutely not going in the direction of these extreme and stupid applications,” Prof Benabid told the BBC.

“Our job is to repair the injured patients who have lost function.”

What do experts think?

Prof Tom Shakespeare, from the London School of Hygiene and Tropical Medicine, said while this study presents a “welcome and exciting advance”, proof of concept was a long way from usable clinical possibility.

“A danger of hype always exists in this field. Cost constraints mean that hi-tech options are never going to be available to most people in the world with spinal cord injury.”

Only 15% of people with disabilities had a wheelchair or other assistive devices, he said.

Details of the exoskeleton have been published in The Lancet Neurology journal.