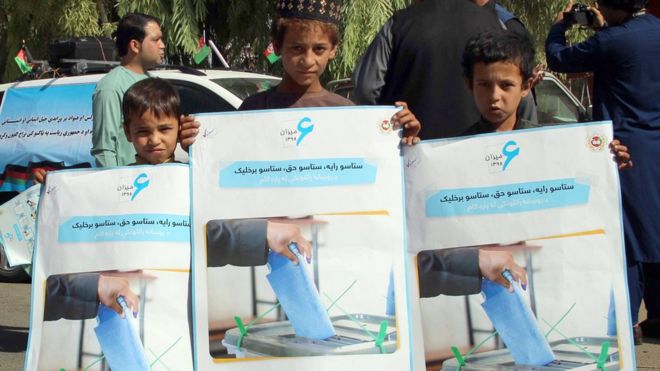 Afghanistan is set to choose its next president against a backdrop of increasing violence and corruption fears.

The very act of voting is expected to put people in danger in many areas: the Taliban have warned they will target polling stations in order to disrupt the election.

So, what do you need to know about the vote – and why should you care?

Why does this election matter?

Afghanistan’s next president will lead a country devastated by four decades of war.

The conflict continues to kill thousands of people every year, drawing in forces from around the world

Nearly two decades since the international community intervened, the US has been trying to negotiate an end to the conflict with the Taliban. The US currently has about 14,000 troops in Afghanistan, as well as thousands more from countries like the UK, Germany and Italy, there as part of a Nato mission to train, advise and assist the country’s security forces.

That should mean whoever is elected president in the fourth election since US-led troops ousted the Taliban in 2001 has a key role to play at a crucial moment in the country’s history.

However, the Taliban currently refuse to negotiate directly with the Afghan government, saying it is illegitimate.

What’s more, the militant group has said it will only begin negotiations with Afghan authorities after a deal with the US is agreed.

So who sits at the head of Afghanistan’s government may not be the US’s primary concern – but it matters to the people caught in the crossfire between the army, the Taliban and other insurgents.

BBC research found an average of 74 men, women and children died in the conflict every day during the month of August across Afghanistan. A fifth of those killed were civilians.

According to the United Nations, more civilians were killed by Afghan and US forces in the first half of this year than by insurgents.

Peace – and the new president’s ability to negotiate it – will be top of most people’s agenda.

What are the other issues?

Five years ago, the presidential election was mired by allegations of fraud and vote rigging. It took months to actually reach a result, with a deal between the two main contenders negotiated by the US ending in a “National Unity Government”.

Hopes are not high that things will be better this time.

Out of a population of about 37 million, fewer than 10 million are registered to vote – and even fewer are expected to cast a ballot. A poll carried out by the Transparent Election Foundation of Afghanistan found more than half of respondents were not planning to vote.

This is in part due to threats of violence from the Taliban, who have said they will attack polling booths and have already targeted election rallies.

There are also large areas of the country under Taliban control, where the Kabul government has little to no power, and voting is all but impossible.But a perceived lack of enthusiasm among voters is also attributed to a feeling things may not change for the better – not helped by the fact the same two men who fought for months over the top job in 2014 are the front-runners once again.Both have been accused of corruption while in office. Meanwhile, unemployment stands at about 25%, according to the UN, and almost 55% of Afghans are living below the poverty line.

Who are the contenders?

Eighteen men – including former warlords, ex-spies and members of the country’s former communist government – initially put themselves forward to fight the election, but five have dropped out.

Not one woman is running for president, and only three women appear on the tickets of others.

The two main contenders are Ashraf Ghani, the current president, and Abdullah Abdullah, who was made chief executive after negotiations in 2014.

How does the vote work?

The Afghan president is elected through a two-round direct voting system. A run-off is triggered if no candidate receives more than 50% of the votes cast.

Results are due three weeks later. A second round, if needed, will be held in November.

Almost 5,000 polling stations will be open on Saturday for people to cast their votes. Hundreds more were meant to open, but will remain closed on the day due for security reasons.

A biometric voting system – based on fingerprints – will be used across the country to try to avoid fraud as people cast their ballots.

Election officials revealed on the Friday before the election that just half the ballot boxes had reached the polling stations. They said they were confident all would have reached their destination by Saturday morning, when voting was due to start.