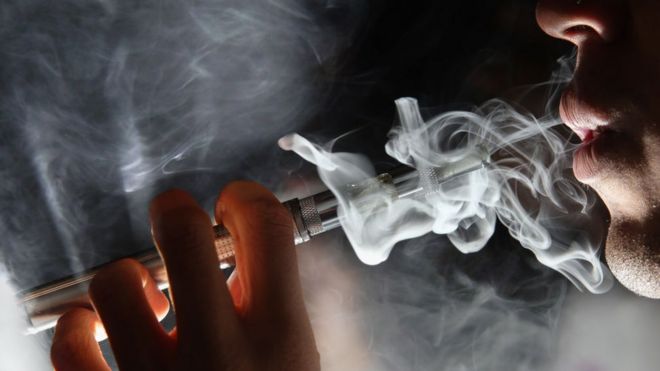 India’s cabinet has announced a ban on the production, import and sale of electronic cigarettes, saying they pose a risk to health.

An executive order had been approved banning vaping products because of their impact on young people, Finance Minister Nirmala Sitharaman said.

It is not clear if the order will also prohibit the use of vaping equipment.

India has more than 100 million adult smokers, making it a huge potential market for e-cigarette companies.

Vaping – which involves inhaling a mix typically made of nicotine, water, solvents and flavours – is seen as an alternative to smoking which can help you quit, but its impact on health is still not fully known.

The ban will include jail terms of up to three years for offenders. Traditional tobacco products are not affected.

“This means the production, manufacturing, import and export, sale, distribution and advertising related to e-cigarettes are banned,” Ms Sitharaman told a news conference.

She said evidence from the US and India suggested some young people saw vaping as a “style statement”.

India is the world’s second-largest consumer of tobacco products after China, and more than 900,000 people die in the country each year from tobacco-related illnesses.

Proponents of vaping say it helps people stop smoking and that banning it would encourage ex-smokers to pick up the habit again.

But India’s health ministry, which proposed the ban, says it is in the public interest to ensure vaping doesn’t become an “epidemic” among young people.

While the Indian market seemed ripe for the expansion of popular e-cigarette companies like Juul, it hadn’t taken off like it has in the US or the UK.

Vapers in the US, UK and France spent more than $10bn (£8bn) on smokeless tobacco and vaping products in 2018.

But it’s a different matter when it comes to vaping.

Market research group Euromonitor estimates that the number of adults who vape will reach almost 55 million by 2021.

In the US, where the potential health risks of e-cigarettes are in the spotlight, there have been 450 reported cases of lung illness tired to vaping this year. There have also been at least six deaths across 33 states.

Health investigators in the US are trying to establish whether a particular toxin or substance is behind the outbreak, or whether it’s the result of heavy usage.

India’s ban came a day after New York became the second US state to prohibit the use of flavoured e-cigarettes. Critics of vaping say flavours appeal particularly to children and risk them becoming addicted to nicotine.