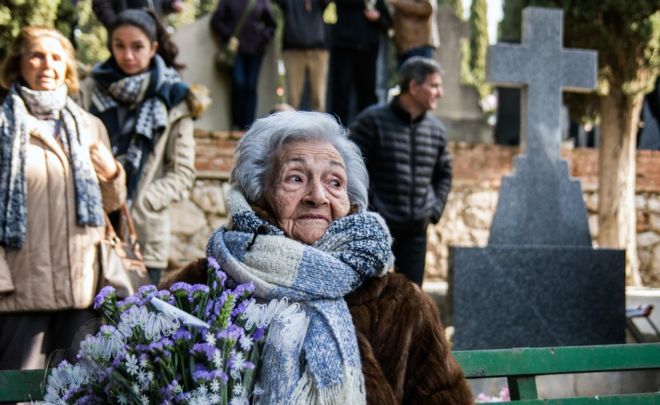 Supporters and relatives saw Ascensión Mendieta fulfil her ambition of being buried together with her father on Tuesday, after a life spent searching for justice.

Aged 93, she died in Madrid 80 years after Timoteo Mendieta was shot by a fascist firing squad and his body was dumped in a mass grave.

She became a justice campaigner for victims of Spanish dictator Gen Francisco Franco, and fought successfully to have her father’s body exhumed and given a proper burial.

“Now I can rest in peace,” she said in 2017, at the end of a legal battle that had taken her as far as Argentina following a lifetime of closed doors in Spain.

The second eldest of seven children from the village of Sacedón, east of Madrid, she never forgot how, as a 13 year old, she had opened the door after lunchtime one day to a group of men she described as “well spoken”. It was autumn 1939 and the soldiers asked where her father was sleeping the siesta, before taking him away to Guadalajara, 50km (31 miles) away

According to his family, Timoteo Mendieta had seen no real action as a soldier on the losing Republican side in the Spanish Civil War (1936-39). But, besides being the village butcher, he had been the head of the local branch of the UGT trade union. In the Spain led by Franco, that was enough to warrant a death sentence.

Mendieta was shot against the wall of Guadalajara’s cemetery on 16 November 1939, one of an estimated 822 executions carried out there up to 1944.

The family were not allowed to visit the mass grave and instead threw flowers over the cemetery wall.

As well as the cruelty of her father’s murder, Ascensión recalled the hardship and ostracism her mother endured, forced to move the family away to a single room in Madrid.

“My mother was left a widow with seven children. I don’t feel rancour, but all those killed unjustly should all be buried decently in boxes,” she once said.

Once democracy was restored in Spain after Franco’s death in 1975, Ascensión and other relatives petitioned Spain’s authorities to assist in the location of their father’s remains, but without success.

Then, at the age of 88, Ascensión flew to Argentina to add her complaint to a growing case file being compiled by Judge María Servini. The Argentine judge had launched an investigation, at the behest of Spanish memory associations, into crimes against humanity during the Franco regime.

When Timoteo Mendieta’s remains were finally exhumed on the order of a Spanish judge who accepted Ms Servini’s request that he be sought as a missing person, it was the first time a Franco-era victim had been recovered through the courts.

It was a huge breakthrough, but Ascensión’s first thoughts were for Paz, the sister with whom she had knocked on doors in Guadalajara and Madrid in search of justice, but who had died too soon to see it arrive.

“If it wasn’t for that judge in Argentina, we would never have found him. In Spain no-one has done a thing for the dead,” Ascensión said.

They all died for the same cause, because they were from the left, and for that very reason we should fight for them to be dug up

After her coffin had been lowered into the same tomb as her father, one of her four children, Francisco Vargas Mendieta, paid tribute to her life, from the cruel blow of losing her father to her hard times as a teenage seamstress and her battle for justice and historical memory.

“Many people say what Ascensión did, and what others of us do, reopens wounds, but, quite honestly, our wounds are already infected.”

Who was Francisco Franco?