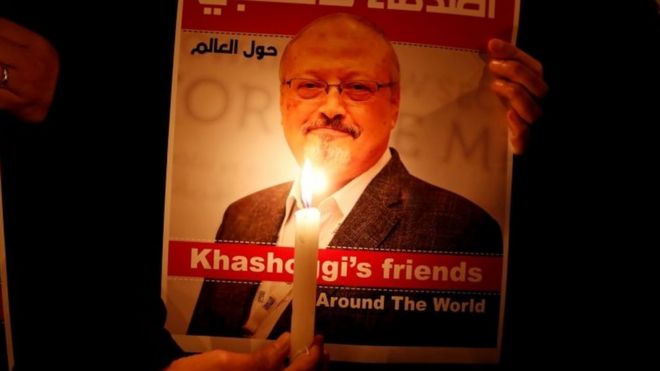 A Turkish newspaper has published new details of a recording which reportedly captured the final moments of murdered Saudi journalist Jamal Khashoggi.

The pro-government Sabah newspaper says the transcript is from a recording taken inside and later obtained by Turkish intelligence.

It includes information such as the journalist’s alleged last words.

Khashoggi wrote a column for the Washington Post newspaper and was based in the US before his disappearance.

His mysterious death piled scrutiny on Saudi Arabia, which released conflicting information regarding his disappearance in the aftermath.

Saudi authorities have since blamed a “rogue” operation for his murder and put 11 men on trial.

What does the newspaper say?

The Sabah has consistently made international headlines by carrying details – including some that have been disputed – about the journalist’s mysterious death.

The newspaper published two new reports this week into Khashoggi’s death at the hands of a group they label a “hit squad”.

Their latest report details information from the alleged recording.

It includes details such as a forensic expert, part of a team sent from Saudi Arabia, allegedly referring to the journalist as an “animal to be sacrificed” prior to his arrival.

The Sabah report says Khashoggi, once inside in the consulate, became suspicious and was told he had to return to Riyadh because of an Interpol order.

The journalist allegedly refused to comply with the group’s requests, which included texting his son, and was then drugged, according to the newspaper.

He reportedly then told his killers, in his last words, to not keep his mouth closed because of his asthma, but then lost consciousness.

Khashoggi was suffocated with a bag put over his head, the Sabah reports, with the sounds of a scuffle allegedly picked up by the recording.

They newspaper also alleges the tape captured his alleged dismemberment at the hands of the forensic expert.

Reports of the existence of audio recordings from Khashoggi’s death have been around since last year.

Turkish officials have publicly confirmed their existence and say they have shared them with international governments but is unclear how the newspaper apparently obtained them.

Almost a year on from his death, Khashoggi’s body has not been recovered despite international pressure.

Earlier this year, a UN expert on extrajudicial killings called for an independent and impartial investigation into his death.

Special rapporteur Agnes Callamard described the journalist’s death as a “deliberate, premeditated execution” and alleges “the state of Saudi Arabia is responsible” and should be investigated.

The Saudi government rejected her report and have consistently denied those responsible for the death were acting on official orders.