The first day of school can be nerve-wracking. Especially when not everyone has such supportive classmates.

Two elementary school boys in Wichita, Kansas, set an example from which we can all learn: a lesson in kindness.
Courtney Moore dropped off her 8-year-old son, Christian, for the first day of school and watched as he sat down on the ground with another boy who was crying in a corner, she told CNN affiliate KAKE.
“He was consoling him,” she told KAKE. “He grabs his hand and walks him to the front door. He waited until the bell rang and he walked him inside of the school.”
Christian’s gesture, though, was exceptionally kind. The other 8-year-old boy, Conner, has autism.
And while he was so excited for his first day of school, he just got overwhelmed with all the commotion, his mom, April Crites, told CNN.
Conner decided he wanted to take the bus for his first day, but it arrived a little early. The doors to the school weren’t open quite yet, so everyone was waiting outside. It was noisy and there was a lot of chatter.
“He gets overwhelmed pretty easily,” Crites said. “And he’s very emotional. Tears come when he’s sad, tears come when he’s happy.” 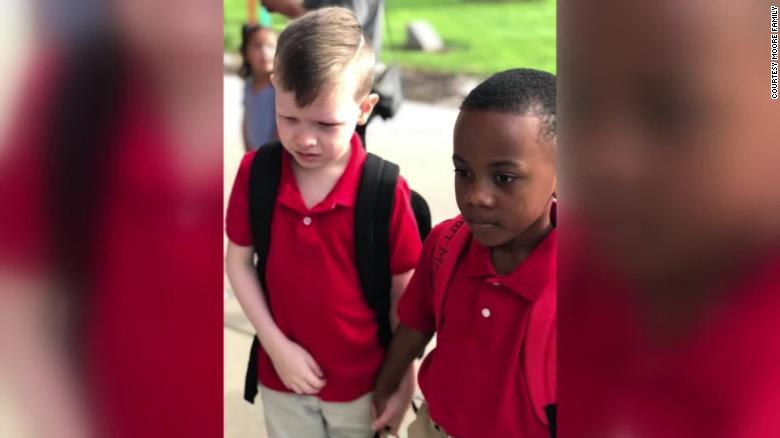 Two elementary school boys in Wichita, Kansas, set an example from which we can all learn: a lesson in kindness.
She told KAKE that she fears every day that someone is going to laugh at him because he doesn’t speak correctly or because he doesn’t sit still or because he jumps up and down and flaps his hands.
Because Conner decided to take the bus, she wasn’t there that day. But as Moore’s Facebook post made its way around, Crites saw it and said she just started crying.
The boys clicked immediately. They have hung out twice since that first day, running around and playing video games with each other.
Conner can get frustrated when he’s playing with other boys, but not with Christian.
“He’s so excited to have a friend,” Crites said. “He said to me, ‘I love him.'”
Christian didn’t see Conner’s autism or anything different about him, he just saw someone in need of a friend.
“He found me and held my hand and I got happy tears,” Conner told KAKE.
SOURCE:CNN
Share on:
WhatsApp
Share this on WhatsApp