7-week-old Oliveah just started daycare, and when she cries, her teachers ask all the usual questions: Is she hungry? Does she need a diaper change? Is she coming off of opioids?

That last question might sound unusual, but this new child care center in Huntington, West Virginia, is unusual: It serves only babies and toddlers who were exposed to drugs in the womb.
It’s believed to be the first of its kind in the country — and there’s a waiting list to get in.
That’s because at Cabell Huntington Hospital, the largest hospital in the city, 1 out of 5 babies is born to a mother who used opioids while pregnant.
The babies go through treatment for drug withdrawal before they’re discharged from the hospital, but that doesn’t mean the problems end there.
The babies at the child care center range in age from 6 weeks to 2 years, and sometimes cry for hours on end. Teachers struggle to calm them down.
“They’re just inconsolable,” said Suzi Brodof, executive director of the center. “It’s not just crying. It’s a high-pitched wailing.”
“It’s exceptionally difficult to hear them cry,” added Janie Fuller-Phelps, the director of the center. “There are times you just feel helpless, hopeless.”
It gets worse: The babies sometimes have twitching and tremors — even seizures. 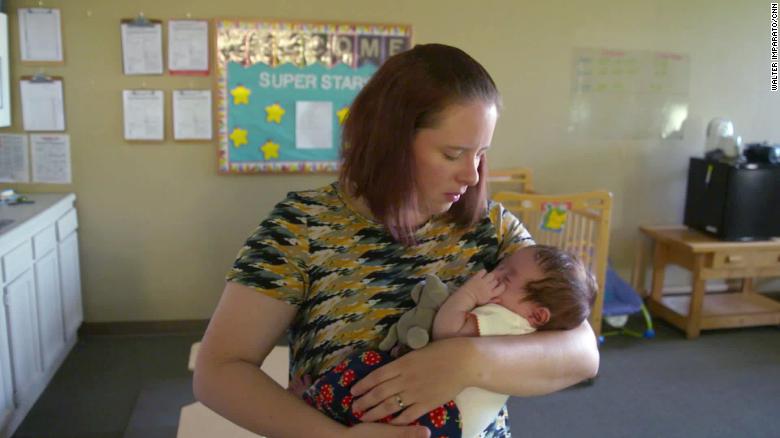 A caretaker tends to 7-week-old Oliveah.
When the center opened in June, staffers from the hospital visited to share what works best for babies with neonatal abstinence syndrome (NAS). These babies are super sensitive, they advised. Keep the lights dim. No bright colors on the walls. Where other babies and toddlers might love stimulation — loud singing or noisy toys — these babies need the opposite.
“These children just have different needs than other children,” Brodof said.
That’s why some babies with NAS get kicked out of other child care centers.
“Yes, they actually get kicked out. It happens frequently,” said Lisa Ertl, interim director of the division of early care and education at the West Virginia Department of Health and Human Resources. “The typical caregiver doesn’t know how to handle them.” 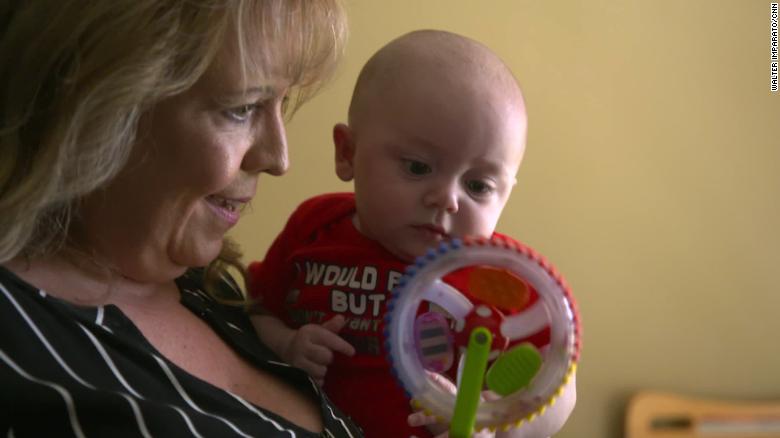 Janie Fuller-Phelps holds 4-month-old Huck.
The center in Huntington, run by River Valley Child Development Services, is funded by the state and currently has eight children. There’s space for eight more, but not enough money to pay for staffing.
Six of the children at the center were exposed to opioids while in the womb and two were exposed to methamphetamines, according to umbilical cord testing. They were all exposed to other drugs as well.
Even after just a few weeks, the teachers can see changes in the children. Huck, a 4-month-old baby boy, has fewer crying spells, and now smiles and giggles at his teachers.
But like many babies exposed to drugs, his muscles are tense, and his teachers massage him and straighten his arms and legs. 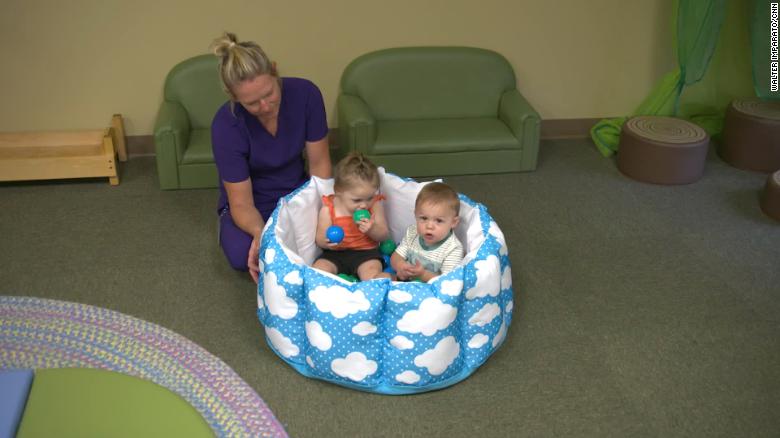 A daycare teacher cares for 11-month old twins.
The center’s oldest children are 11-month-old twins, a boy and a girl. At first, the girl twin didn’t want anyone to hold her. Now, she toddles over to her teacher and throws up her arms, waiting to be picked up.
The twins’ mother, and most of the other mothers at River Valley’s center, live at Project Hope for Women & Children, a drug rehab center in Huntington. While their babies are in child care, the mothers can focus on their own treatment during the day.
“The moms are not villains,” Brodof said. “They suffer from a disease and are taking steps to care for themselves and their children, and that’s where we come in.”
The center’s goal is to give the children the best possible care early on, so they’re less likely to face problems when they get to school. Babies exposed to opioids prenatally are more likely to suffer problems later in life such as motor and cognitive impairments and ADHD, according to a 2015 study by researchers at Vanderbilt University Medical Center.
“The damage of prenatal opiate exposure is debilitating and long lasting,” according to the researchers. 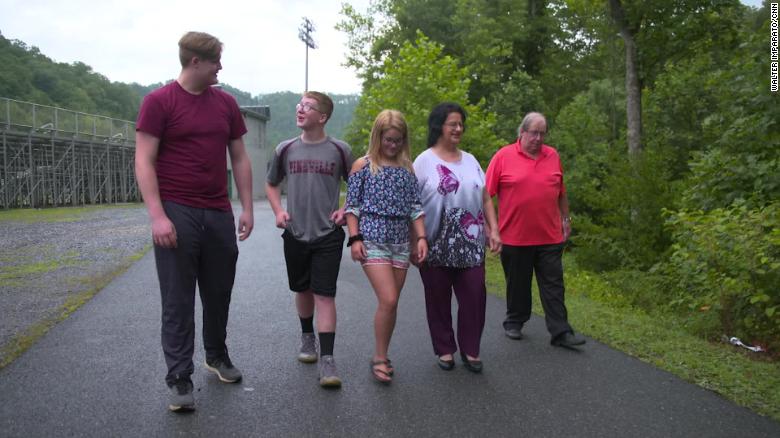 Jacob, Gabriel and Andrianna Riling on a walk with their 70-year-old grandparents, Beverly and Andrew Riling.
Beverly Riling knows this instinctively.
Her 11-year-old granddaughter, Andrianna Riling, was born with NAS, and in October she filed a lawsuit against several opioid manufacturers.
“After she came home from the hospital, she shook and cried constantly,” Riling remembers. “Nothing calmed her down.”
According to the lawsuit, Andrianna “is a victim of the opioid crisis that has ravaged Wyoming County, West Virginia, the epicenter of the national opioid crisis, causing immense suffering to those infants born addicted to opioids and great expense to those forced to deal with the aftermath.”
Riling and her husband, Andrew, both 70, have custody of Andrianna and her two older brothers, Jacob and Gabriel, ages 16 and 14. The suit asks for damages to compensate them for the NAS-related injuries, as well as punitive damages.
Andrianna’s lawyer, Booth Goodwin, and his colleagues are screening about 200 additional children for more possible lawsuits
Raising a family was the last thing the Rilings expected to be doing at their age but because of the opioid crisis, they’re hardly alone in West Virginia.
In Wyoming County, the rural area where the Rilings live, there are just over 20,000 residents. Among them, 409 are children living with grandparents and 313 are children living in foster care, according to the Annie E. Casey Foundation’s Kids Count Data Center.
Back at the child care center, Brodof is trying to raise money so she can hire more staffers and fill the other eight spots.
“We know they need that extra special care, that cuddling, that love,” she said. “And with that we know we’ll be able to make a difference for them.”
SOURCE: CNN
Share on:
WhatsApp
Share this on WhatsApp