The marriage contract had just been signed, and the festivities were in full swing. But just as close relatives of the newlyweds were emerging from an upstairs room to join hundreds of friends and family members at a Kabul wedding hall, an uninvited guest walked forward. What should have been a moment of celebration turned into a scene of unimaginable carnage, as an ISIS suicide bomber blew himself up in front of the band playing in the men’s section of the venue.

Officials say at least 63 died — the bride and groom survived — but relatives think the death toll may be higher. Violent death is an everyday occurrence in Kabul, but this attack shocked many with its sheer savagery. “Before the blast we were so happy, all our family, relatives and friends were at the hall and we were enjoying the wedding,” Basir Jan, a brother of the groom, told CNN. “When the blast happened, I saw dead bodies of my relatives and friends. Eight of my close friends were killed in the blast. It was a scene I will always remember.”
The devastation represents a personal tragedy the families who were targeted in Kabul at the weekend. But it also provided a bloody backdrop to the final stages of peace talks being held now between the Taliban and the United States. 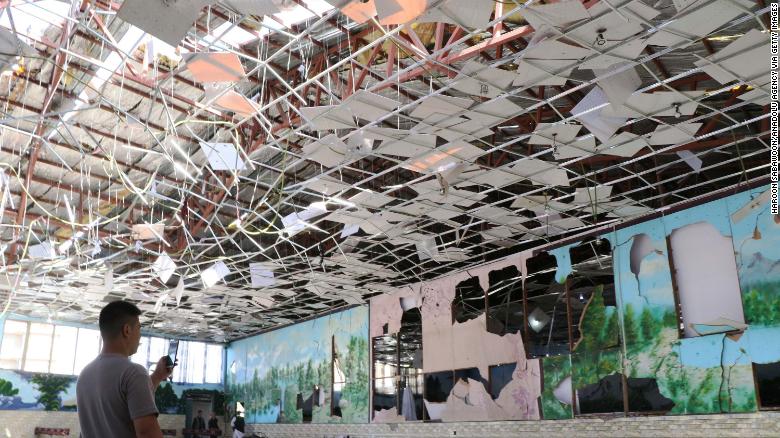 A wedding hall is devastated after a suicide bomber targeted a ceremony in Kabul.
The US top negotiator, Special Representative Zalmay Khalilzad, tweeted shortly after the bomber walked into the celebration: “We must accelerate the #AfghanPeaceProcess including intra-Afghan negotiations. Success here will put Afghans in a much stronger position to defeat ISIS.”
It’s a tweet that manages to be both startlingly opportunistic, flawed but largely accurate at the same time. Accurate, since a peace deal between the US and Taliban would enable both to focus on ISIS — a comparatively tiny, yet brutal part of the insurgency raging in Afghanistan now. Flawed, because a peace deal would not guarantee the Taliban didn’t pursue its main enemy, the Afghan government first, before getting around to ISIS. Opportunistic, as the tweet also exposed the “deal at all costs” attitude behind the talks now: The massacre is a reflection of how badly Afghanistan has collapsed, not of how well the proposed peace deal might fix it. Trump wants out of Afghanistan, that much is clear, despite saying last year he would win. But how much of an inglorious an end to America’s longest war is he prepared to countenance to make that happen?
To recap. Some months ago the United States made a key concession with the Taliban, agreeing to direct talks that excluded the Afghan government from the table — something the insurgents always wanted.
Sources close to the talks say they are 99% resolved around a deal between the US and the Taliban that would involve a reduction in American troops, and more importantly a ceasefire between these two combatants.
That ceasefire would not necessarily bring an end to fighting between the Taliban and Afghan government forces — only remove the US’s airpower from the battlefield. The Taliban and Afghan government would then begin separate peace talks, the sources say. Afghan critics of the plan worry that as those peace talks inevitably stumble, Kabul government would begin to lose territory to the Taliban, abandoned by Washington and with American firepower sitting idly by. 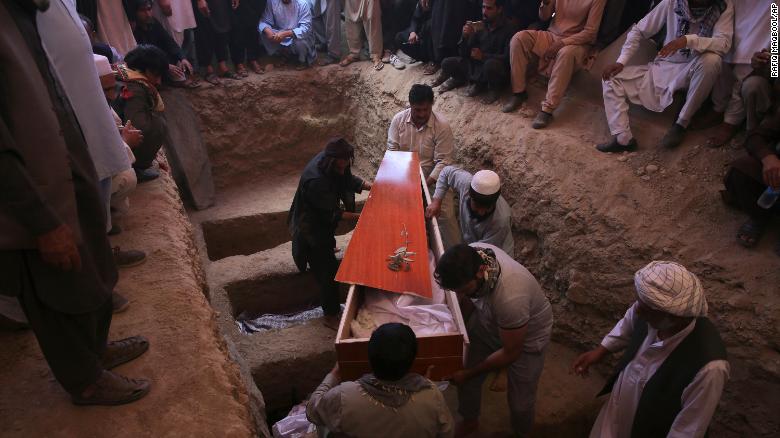 Afghans carry the body of a victim of a wedding hall bombing during a mass funeral in Kabul.
The counter-narrative to this bleak assessment is threefold. First, the Taliban knows it must join forces with an internationally recognised government in order to qualify for foreign aid, so a return to the atavism of the 1990s is unlikely. Also, the US must eventually leave Afghanistan one way or another, or at least reduce its expenditure there. And finally that violence has rocketed these talks progress — both sides trying to assert dominance on the battlefield — and that peace and a reduction of violence has to be the only priority.
This conclusion is valid, yet misses one point — the reason why the United States went into Afghanistan in the first place. Al-Qaeda hasn’t vanished. In fact, when the longtime Taliban leader Mullah Omar died, his successor Mullah Habitullah made the ranking AQ leader in the Afghan insurgency, Sarraj Haqqani, the commander of his military operations. Habitullah’s son reportedly also became a suicide bomber in Helmand in 2017. This does not represent a moderate dilution of the Taliban, as some of their speeches would like to suggest. And al-Qaeda may lying low right now, but are still very much in the picture. They were the guys behind 9-11, by the way.
The details of the deal are set to emerge in the next week or so. It looks likely that it will involve a reduction in US troop levels and limit what the US can do on the battlefield, while the Afghan government and those behind the insurgency come to their own accommodation. It will also run into presidential elections in Afghanistan, usually a compromised and scatty affair, which are due on September 28. Afghans will elect a president just as a wobbly peace agreement lurches into view.
President Trump may sell it as a historic deal. But only in the months ahead will we learn if it gives al-Qaeda more room to grow, and what it spells for the hundreds of thousands of Afghans who fought for the Americans and for the way of life America offered them.
For Afghans, it is a matter of life and death, a far more serious proposition than that which America risks: The possibility its longest war ends with a betrayal, and the possibility the enemy they sought to vanquish flourishes again.
“I want peace for my country,” says Basir Jan, the brother of the wedding attack groom. “But we never get it.”
SOURCE: CNN
Share on:
WhatsApp
Share this on WhatsApp

admin February 7, 2019 No Comments
I always emailed this website...