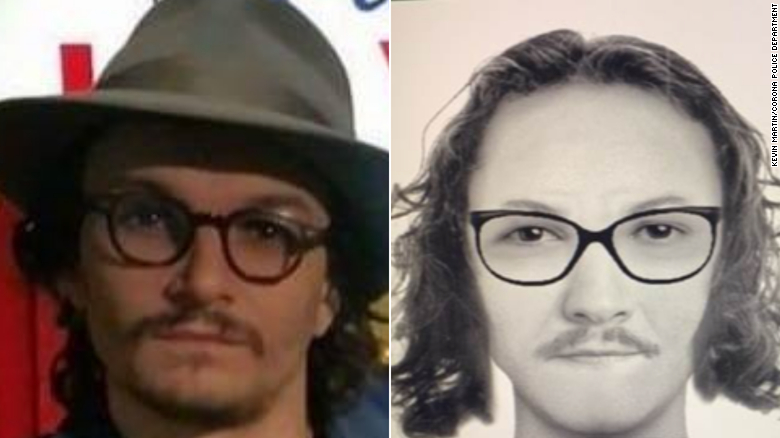 Kevin Martin says he was just looking to play pool at a local bar in Norco, California, when a man mistook him for a child predator and beat him.

Martin, a 34-year-old private meteorologist from Corona, California, told CNN that the man approached him at the bar on Thursday and asked if they could speak outside. The man was visibly intoxicated, Martin said.
As the two headed outside, another man followed, took out a phone and showed Martin a police sketch. Martin recognized the sketch, it was of a suspect from a May incident in which Corona police said a man with thick glasses, long hair and a mustache made sexual comments to an 11-year-old girl.
“We don’t allow your kind in here,” the man said, according to Martin, once they were all outside. “I have a daughter and I would kill guys like you.”
Martin — who also has thick glasses, long hair and a mustache — then argued with the man for 20 minutes trying to convince him that he wasn’t the suspect, he said.
“I knew it was going to get bad,” Martin said Saturday.
Things got violent. Martin was punched and choked, tried to run away and was beaten more, he said.
“I probably got 20 to 25 to blows back of the head. Four in the face, two in the jaw and one in forehead,” Martin told CNN. A group of about 15 people watched the beating, he said.
That’s when Martin pleaded: “If you keep punching me like this, you’re going to kill me.”
Two people came to his rescue before Riverside County Sheriff’s deputies arrived on the scene, Martin said.
A suspect was arrested for battery in the incident and the investigation remains ongoing, a Riverside Sheriff’s Department spokesperson said in an email to CNN on Monday.
Martin was issued a notice to appear in court on November 6 to state his case.

Martin says his followers told him about the suspect

Martin runs Southern California Weather Force, a weather alert system with more than 70,000 followers.
In May, when Corona police first alerted the public about the child annoyance suspect, 20 of Martin’s followers sent him messages saying he resembled the sketch, he said.
“They said, ‘Kevin that looks exactly like you,'” Martin said. “I was going to brush it off, but the incident took place about half a mile from my house.”
He called police, saying he was worried people would think he was the suspect. Two detectives came to his house and questioned him, he said.
“Our detectives interviewed him and ruled him out as a suspect,” said Sgt. Chad Fountain, Corona police spokesman. “It’s unfortunate, we didn’t want anything to happen to Mr. Martin. We never named him as a suspect, so it’s unfortunate that this happened to him.”
The investigation is stagnant, and investigators are waiting for new information, Fountain said.
Martin did say he found it odd he was targeted almost three months later. He said he also hasn’t changed his appearance since getting a haircut in March.
“It was just me being at the wrong place at the wrong time,” he said. “I’m glad it did happen so it doesn’t happen to anyone else.”
SOURCE:CNN
Share on:
WhatsApp
Share this on WhatsApp