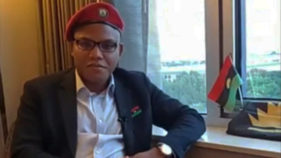 Leader of the Indigenous People of Biafra, (IPOB) Sunday commended members of the secessionist group for assaulting a Nigerian Senator Ike Ekweremadu.

“The courageous act by IPOB at Nürnberg Germany is a polite warning to those engaged in selling our collective interest to Fulani caliphate,” Kanu tweeted on Sunday.

Ekweremadu Saturday was physically assaulted by some IPOB members in Nuremberg, Germany.

He confirmed the attack in a statement by his media aide Uche Anichukwu.

The Senator said he was disappointed by the conduct of the IPOB members and had reported the attack to the Nigerian Ambassador to Germany, Yusuf Tuggar.

“I tried to engage them, but when they became unruly, I had to leave the venue. The organisers also invited the police and I was accompanied by the venue,” Ekweremadu said.

A 64-second video about the attack had gone viral on the social media earlier on Saturday.

In the video, Ekweremadu was seen being violently questioned over his alleged conspiracy with the Federal Government to proscribe the IPOB in the South East and killing several of its followers.

Contrary to their stance, Ekweremadu said he is “one of the persons, who have spoken up on justice for Ndigbo, the Python Dance, judicial killings in Igbo land and elsewhere both on the floor of the Senate and in my written and personal engagements with the Presidency and the media.”

The Senator disclosed that he rallied the southeast Senate Caucus to secure Mazi Nnamdi Kanu’s release with Senator Enyinnaya Abaribe taking him on bail to douse tension in the South East.

“I nevertheless do not hold this to heart against them, for they know not what they do,” Ekweremadu said.

While many have condemned the attack on Ekweremadu, Kanu described it as a show of courage by IPOB members.