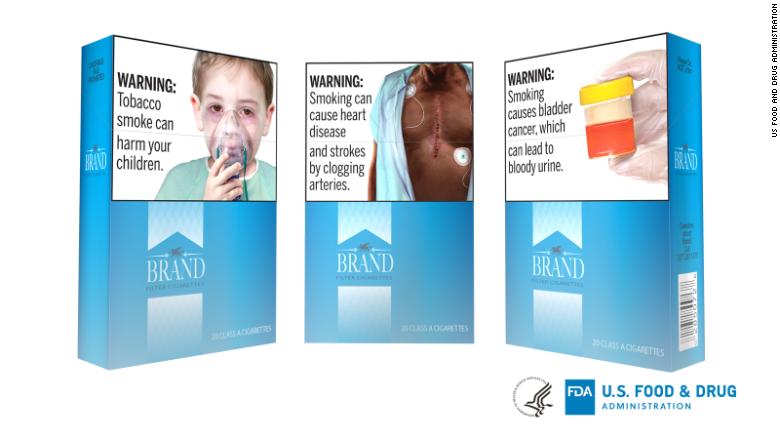 Warning labels on cigarette packages could soon be more graphic, warning that “Smoking reduces blood flow to the limbs, which can require amputation,” and “Smoking causes bladder cancer, which can lead to bloody urine.”

The US Food and Drug Administration on Thursday issued a proposed rule that requires tobacco companies to place new graphic health warnings on cigarette packages and in advertisements. The proposed warnings feature color images and describe the health risks of smoking.
The new cigarette health warnings, once finalized, would appear on cigarette packages and in advertisements, occupying the top 50% of the area of the front and back panels of packages and at least 20% of the area at the top of cigarette ads, according to the FDA.
This draft version of the rule comes after a judge ordered last year that the FDA has “delayed” issuing a rule mandating such graphic warnings. The final version of the rule is due to be issued by March 15, 2020. The warnings then would appear on products and in advertisements 15 months after the final rule is issued.
There are 13 proposed warnings, which feature text statements accompanied by color images, and they represent the most significant change to cigarette labels in the United States in 35 years, according to the FDA.
“While most people assume the public knows all they need to understand about the harms of cigarette smoking, there’s a surprising number of lesser-known risks that both youth and adult smokers and nonsmokers may simply not be aware of, such as bladder cancer, diabetes and conditions that can cause blindness,” Dr. Ned Sharpless, acting FDA commissioner, said in a written statement on Thursday.
“With these new proposed cigarette health warnings, we have an enormous public health opportunity to fulfill our statutory mandate and increase the public’s understanding of the full scope of serious negative health consequences of cigarette smoking,” he said. “Given that tobacco use is still the leading cause of preventable disease and death in the U.S., there’s a lot at stake to ensure the public understands these risks.”

‘It’s way past time for this to happen’

The United States will join at least 120 other countries and jurisdictions that have finalized requirements for warning labels that include pictures to be printed on cigarette packages, according to the advocacy organization Campaign for Tobacco-Free Kids.
Pictorial warning labels on cigarette packs could reduce smoking prevalence by 5% in the short term and 10% over the long term in the United States, according to a study published in the journal Tobacco Control in 2016.
The study projected that over the next 50 years, pictorial warning labels could avert 652,800 smoking-attributable deaths, 46,600 cases of low birth weight, 73,600 preterm births and 1,000 cases of sudden infant death syndrome.
“It’s very clear that half of the people who currently use tobacco products die from using them. It’s 480,000 people each year in the United States,” said Mary Rouvelas, senior counsel for the American Cancer Society Cancer Action Network, which is the advocacy affiliate of the society.
“This is a proven mechanism that keeps people from picking up cigarettes and helps them quit — or I should say helps increase the number of quit attempts,” she said about graphic warning labels
Tobacco use is the leading cause of preventable disease, disability and death in the United States, according to the US Centers for Disease Control and Prevention.
“We just believe that it’s way past time for this to happen and we’re very glad that the FDA looks like it’s moving forward,” Rouvelas said.
American Cancer Society Cancer Action Network was among physician groups, anti-tobacco groups and others that sued the FDA in 2016 claiming that the agency delayed taking action on a rule to implement graphic warnings as required under the Tobacco Control Act, which became law in 2009.
American Heart Association CEO Nancy Brown said in a statement Thursday, “The FDA’s years-long delay in issuing these proposed warnings extended the life of the old, ineffective labels for far too long.”

R.J. Reynolds Tobacco Company, which is among the tobacco companies that would be impacted by this FDA rule, said in a statement on Thursday that the company is reviewing the FDA’s latest proposal for graphic warnings
“We firmly support public awareness of the harms of smoking cigarettes, but the manner in which those messages are delivered to the public cannot run afoul of the First Amendment protections that apply to all speakers, including cigarette manufacturers,” Kaelan Hollon, a spokesperson for Reynolds American Inc., said in the emailed statement. RAI is the parent company of R.J. Reynolds Tobacco Company in the United States.
“As FDA considers how it chooses to communicate cigarette information, we encourage the agency to publicize the comparative risks of other tobacco products to the public so that adults who wish to continue to use them can make fully informed decisions between product options in the tobacco category,” the statement said in part. “RAI is committed to promoting tobacco harm reduction, in other words, identifying consumer-acceptable tobacco products that may present less harm than conventional tobacco-burning cigarettes.”
Altria, which owns Philip Morris USA, the maker of Marlboro cigarettes, said in a separate emailed statement that the company “will carefully review the proposed rule and its implications to our businesses and submit comments.”
More than 40 million adults in the United States still smoke cigarettes, according to the CDC, and about 4.7 million middle and high school students use at least one type of tobacco product, including e-cigarettes.
SOURCE: CNN
Share on:
WhatsApp
Share this on WhatsApp