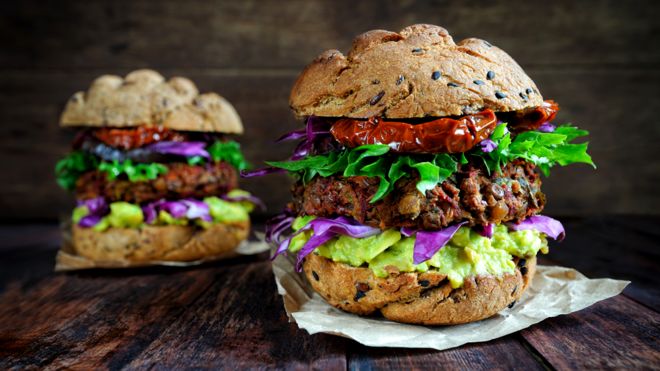 A major report on land use and climate change says the West’s high consumption of meat and dairy produce is fuelling global warming.

But scientists and officials stopped short of explicitly calling on everyone to become vegan or vegetarian.

They said that more people could be fed using less land if individuals cut down on eating meat.

The document, prepared by 107 scientists for the UN’s Intergovernmental Panel on Climate Change (IPCC), says that if land is used more effectively, it can store more of the carbon emitted by humans.

It was finalised following discussions held here in Geneva, Switzerland.

“We’re not telling people to stop eating meat. In some places people have no other choice. But it’s obvious that in the West we’re eating far too much,” said Prof Pete Smith, an environmental scientist from Aberdeen University, UK.

The report calls for vigorous action to halt soil damage and desertification – both of which contribute to climate change.

It also warns that plans by some governments to grow trees and burn them to generate electricity will compete with food production unless carried out on a limited scale.

The Earth’s land surface, and the way it is used, forms the basis for human society and the global economy.

But we are re-shaping it in dramatic ways, including through the release of greenhouse gases into the atmosphere. How the land responds to human-induced climate change is a vital concern for the future.

Climate change poses a threat to the security of our food supply. Rising temperatures, increased rain and more extreme weather events will all have an impact on crops and livestock.

The environmental impact of meat production is important to many vegetarians and vegans. A UK-based group called #NoBeef lobbies caterers to take beef and lamb off student menus.

In the US, vegan burger patties are made from plant-based meat substitutes said to taste like the real thing thanks to an iron-rich compound called heme.

Peter Stevenson, from Compassion in World Farming, said: “A reduction in meat consumption is essential if we are to meet climate targets.”

But in some parts of the world, such as China, beef consumption is growing. This is despite attempts by the Chinese central government to promote traditional diets.

Can food waste be reduced?

The authors of the report encourage action to stop wasting food – either before or after its sale to consumers.

Waste food can sometimes be used as animal feed or, if suitable, redirected to charities to feed people in need.

One organisation here in Switzerland called Partage takes in unsold food discarded by shops and distributes it to local families.

It also collects stale bread and turns it into biscuits, dries fruit, and cans vegetables. All of this helps reduce the CO2 emissions involved in producing food.Don’t trees absorb the CO2 we release?

The extra carbon that humans have put into the atmosphere is nourishing the growth of forests – especially in the Northern Hemisphere.

This can help to mitigate climate change, but it all comes down to a balance of factors. Experts say this effect on forests will be negated if the Earth heats up too much.

In fact, the report says areas near the equator may already be losing vegetation through heat stress.

Dr Katrin Fleischer, from the Technical University of Munich, Germany, warned that in some places a shortage of phosphorus in soil – a key ingredient for plant growth – would also hinder tree growth.

She said: “This would mean that the rainforest has already reached its limit and would be unable to absorb any more carbon dioxide emissions.

“If this scenario turns out to be true, the Earth’s climate would heat up significantly faster.”

How does soil fit in?

Soil is sometimes neglected as part of the climate system. But it’s the second largest store of carbon after the oceans.

Plants absorb CO2 from the atmosphere and lock the carbon away in the soil. But deforestation and poor farming practices can damage its ability to do this. When soil is degraded, carbon is released back into the atmosphere as CO2, while further plant growth is compromised.

Climate change is expected to speed this process up. Higher temperatures can help break down the organic matter in soil, boosting greenhouse emissions.

“The land is part of the problem but if we wise up about the way we use it, it can part of the climate solution.”

Can the problems be solved?

Changing the way humans use the land surface is a daunting challenge, especially as it will entail a major shift in farming methods.

But one practice touted as a climate change solution – bioenergy – has been treated with caution by IPCC experts.

Bioenergy involves burning vegetation as a substitute for fossil fuels.

To some countries, it appears to be an attractive option because CO2 emissions from the process can be captured.

Interactive tool: How much warmer is your city? Select from 1,000 major cities around the world

The International Energy Agency (IEA) predicts bioenergy will outpace solar, wind and hydropower in the next five years.

But the authors of the IPCC report say converting land to bioenergy could deprive countries of soil to grow much-needed crops. They advise limits on the amount of land used for biofuels.

Coronavirus not yet global emergency – WHO